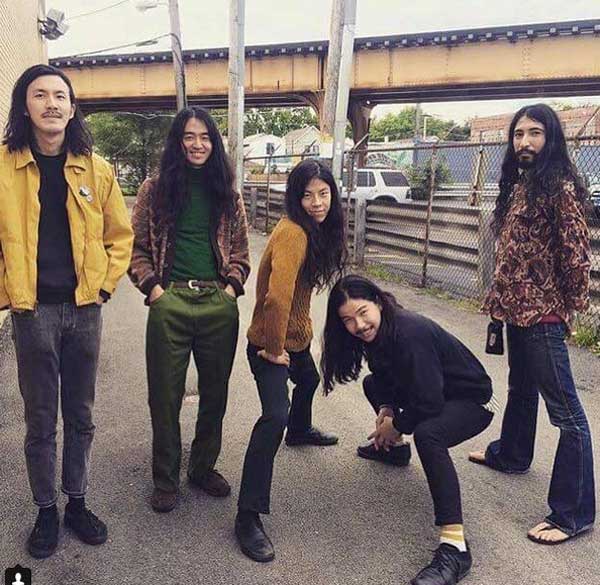 The linguist in me wants to relate Kikagaku Moyo’s name to its English translation (“geometric patterns,” or so says Wikipedia and bandcamp). That impulse notwithstanding, geometry wanders into the Tokyo-based band’s guitar forestry – not in a face-peeling blaze but in a series of waves, wah-wah pedals leading the way. And then geometry seems goine. Or maybe it’s just caught up in some other foot-operated guitar pedal, some gently hair-raising tool, drawing crystal-struck notes out of a light-emitting creak, an opening in the sound universe. A hushed vocal embrace.

There are a thousand metaphors for trippy sound, and I’m trying to avoid them all. Put simply, Kikagaku Moyo can blare and roar with shouts and strums as on 2017’s EP, Stone Garden, and they can be far more beguiling, as on their 2016 LP, House in the Tall Grass, which made my 2017 Pazz & Jop top 10 and started up as if it was a blast furnace. Opening in a torrent, the album turned away from peeling your face and lived off the braided vocals of drummer Go Kurosawa and guitarist Tomo Katsurada. Kikagako Moyo created a warm blanket, a wash of sound peeking between plucky guitars and clacking percussive flows (hard to imagine? Try “Kogarashi,” which sounds like Tokyo seen through Bamako). House in Tall Grass found a spot in my heart.

Of course, you can’t pass on considering a carefully-chosen band name (or even the sometimes wantonly-chosen names that mark, for example, the Elephant 6 bunch, which make for a good point of comparison here). In the case of Kikagaku Moyo – aka geometric patterns – they sling guitars that constantly find their way around the percussive, sub-marine stones, and as a band they reveal well-sculpted interludes aplenty. Kurosawa and Katsurada flow their Japanese lyrics like a perfect mix of psych drone and folksy story-telling. And now and again, tensions simply burst out, rather than creep up slowly, as on the meandering “Dripping Sun” from the new album, Masana Temples.

Produced with polymath guitarist / multi-instrumentalist Bruno Pernadas on the dials, Masana Temples opens and closes with what seem like paeans to river deltas – a sitar hinting at the Ganges with “Entrance” and a six-string guitar riff that sounds like it could originate a mile from the Mississippi with the closing “Blanket Song.” Yep, rivers and fluids make great psychedelic metaphors. Like a good river, Kikagaku Moyo also makes fab psych metaphors. They just happen to wrap them in sonic layers that will lull you, crunch you, wash over you, and in the end delight you. Why else would you jump in?

Top photo: Kikagaku Moyo. Photo from the the KM instagram.