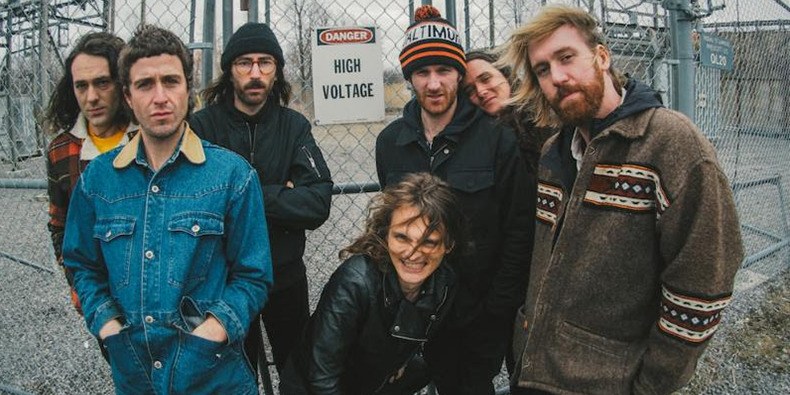 King Gizzard and the Lizard Wizard

Recommended Show: King Gizzard and the Lizard Wizard at the Neptune Theatre

King Gizzard and the Lizard Wizard will be at the Neptune Theatre on October 10, 2017 with special guests Tropical Fuck Storm starting off the show (more info and tickets).

So, assume you’re in a band. You get high a lot. (It’s Australia). You have a bunch of friends with guitars and a couple pals with drum kits. You argue a while because bands are organizations. And organizations need names. One of you likes Jim Morrison’s “Lizard King” moniker. One of you might recall eating gizzards and might free-ramble gizzard and lizard because, you know, they rhyme (and you have some singing in your band). Haggling ensues over a band name. Fuck it, you say, let’s just cram it together and extend the name: King Gizzard & the Lizard Wizard.

The extent of the name makes stoned sense: I mean, you’ve got three guitarists, a bass player, two drummers, and a keyboardist who can shred on the harmonica. So long name equals big band equals big ideas. Getting even higher seems an obvious choice, because you’ve got all this gear, all these pals, and a crazy cool name: King Gizzard and the Lizard Wizard. Once at a new height, you plug in again.

Your gear blurgs and buzzes and gets all sludgy or maybe all hyped out. Maybe it’s you driving the gear; maybe the gear is driving you. It’s psych-rock addle and prog-rock spazzle. The drummers opt to face each other. The guitar players shorten their straps, raise the machine heads high, and add a bunch of warbling, underwater, pock-making vocal effects.

Honestly, the whole thing makes you so psyched that you decide Melbourne just ain’t big enough. This shit needs the road. Before that, though, it merits recording. Oh, yeah, it’s like 2010. You figure, the future is long. So let’s start recording things. Echoes, gauzy reverb, pouncing intensity, guitar filigrees against trilly sounding hi-hats, noise. Dreamscapes. To revisit a Spaceman thing: don’t forget to take drugs to make music to take drugs to. Suddenly you have as many albums as eggs appear in a single carton at the grocery. It’s only 2017, in a flash.

Now, none of the above might involve drugs. The mind can do crazy things. So can the hands. With a slew of guitars (again, 3) and a couple drum kits, and keyboard rack, stuff can get whacked but quick. One minute it’s quiet, kind of hazy. The next, you’re in a jet engine. In the freakin’ thing. Or maybe you’re just a couple inches from the amps. It’s October, and why not.