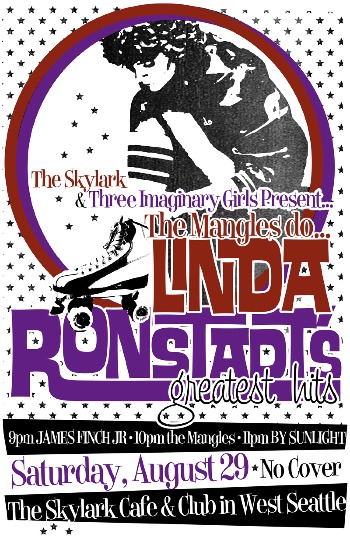 The Mangles do Linda Ronstadt: A West Seattle Saturday night

This weekend is the big goodbye to Harvey Danger with the band playing a series of Seattle shows to bid a fond and official farewell to the HD life.

The last show (this Saturday night) has sold out and the recently added early show is nearly there. I thought it fitting that those of us who don’t have Saturday night tickets might as well congregate somewhere where Sean Nelson might be if he wasn’t taking the stage at the Crocodile: in West Seattle singing along to Dusty Springfield’s “Son Of A Preacher Man” at Skylark with the Mangles (it’s a free show).

You might recognize the Mangles as the band who played my birthday party last year at Chop Suey (and killed with with originals and covers) and who were part of our Shamrock the Vote show a few years back. It’ll be a pub-friendly night (they take the stage at 10p), sure to have us all singing along. My hope is that the night will take a turn towards the Burt Sugarman’s Midnight Special ilk of things:
[video:http://www.youtube.com/watch?v=haZPPBJC8Ic]