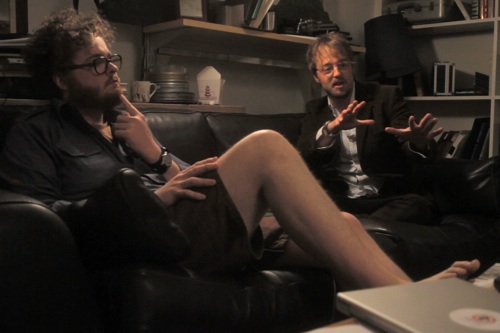 Sean Nelson fans, you may have been asking yourself – what the hell has that guy been up to* lately? Well, here’s your answer. Mr. Nelson co-directed a movie (with Humpday Producer Steven Schardt) that’s getting all kinds of good buzz. It’s about an LA filmmaker (played by Joshua Leonard) whose schemes lead him to faking a drug addiction in order to check himself into a fancy rehab clinic, befriend a sought-after actor there, and convince him to star in a movie – thus, of course, making  millions. Nelson plays his friend, so I’m not sure how big his part is since I haven’t had a chance to see it yet, but hey! A co-directing credit is kind of a big deal, you know?

Anyway, throw in a soundtrack by Robyn Hitchcock, and duh. I am SO there. Nelson, Schardt, and some cast are scehduled to be at tonight’s (!!!) screening, so you can give them all a big round of applause after it’s over. Who’s with me?

*He also had a bit part in The Off Hours