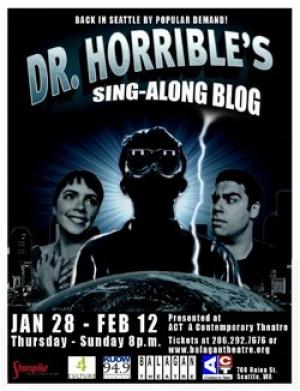 “We do the weird stuff!”

OMG, you guys. I missed this the last time around and I am SO EXCITED that it’s come back! Just to catch you up (in case you don’t know what the hell Dr. Horrible’s Sing-Along Blog is), back in 2008 during the WGA writer’s strike, Joss Whedon wrote an awesome musical tragicomedy web series starring the equally awesome Neil Patrick Harris, Felicia Day and Nathan Fillion.

It’s so popular with Whedonphiles (AKA: Browncoats…*coughcough* that’s my nerd showing) that a bunch of peeps all over decided to rework it as a play, and LUCKY US – The Balagan Theater is putting it on at ACT in Seattle from January 28-February 12!!!!

For a small taste, check out the trailer for the web series here to get ready for the play. I’m betting tickets are going to be scarce, if not sold out, soon – so grab them while you can and get ready to laugh, cry, and you know, probably sing-along.