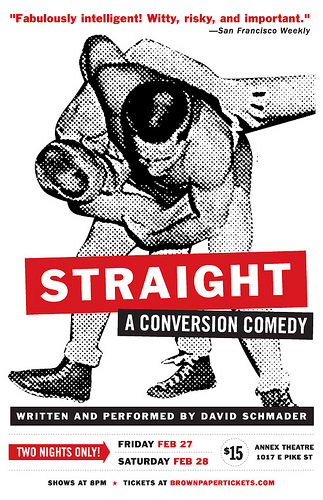 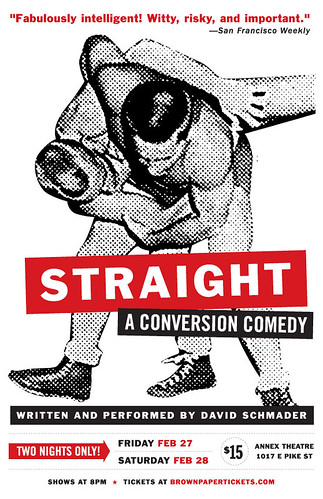 What are you doing to mark the last night of February?

I'll be at the Annex Theatre for the last of a two night run of STRAIGHT: A Conversion Comedy (Written & Performed by David Schmader).

How could I possibly miss out on a one man Schmader show? He was the best MC eva at  TIG's Exile in {Imaginary} Girlville night back in June, so seeing him take the stage to examine the world of "Conversion Therapy" (where gays and lesbians are "cured" of homosexuality) will be amazing.

Here's official words on the show:

Plunging into the heart of this highly charged territory—from going undercover at “ex-gay” support groups to an intensive crash course in Christian heterosexuality deep in the heart of Texas—Schmader blends an essayist’s insight with the spark of stand-up comedy to confront difficult questions, reject easy answers, and get to the bottom of what it means to be “straight.”

Of course, there are other things you could do tonight (per the TIG Calendar)… what do you have planned?