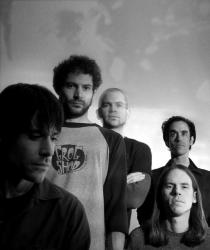 Red Sparowes, post-rock: The soundtrack to my life

Birth. Death. In between you will fall in love, and you will be heartbroken. You will be robbed, but also rewarded. Life will be cataclysmic and calm back to back like a roller-coaster. There will be wars, famines, disease and distress, yet all the beauty, humility and goodwill can overtake all to provide hope–a great sense of hope deeply found in children onto which all should still grasp into adulthood.

The reason I love the umbrella genre of "post-rock" is the fact the music seems to encapsulate the changing seasons of life. When I listen to bands like Red Sparowes and Russian Circles, who played together last Thursday at Neumo's, I begin to think about these things.

Their show is not much to look at, really: Oh hey, another band playing long build-ups which lead into explosive conclusions, dabbling a bit in metal, and no one is singing. The musicians who make up the bands don't look like rock stars, just a handful of normal dudes up on stage jamming out. And of course, per the norm, they have a projector with images flashing behind them.

It is the closeness to human nature post-rock has which keeps me coming back to these shows, even if they do seem repetitive. On the screen behind Red Sparowes, sure the people shown were Communists, or crying children superimposed with a house being nuked, or smiling couples numbering in the hundreds breezily dancing. These images show the gamut of who we are, and correspond with the wide range of emotions conveyed in their music being played at the same time.

With such a show, you can either stand near the front and let the power of the reverberation overtake you, in a near meditated state, placing all your energy in their hands. Or you can stand in the very back having a laugh with friends while drinking a beer, letting the music be a mere soundtrack set in the background. Because either way, the music was made for it.