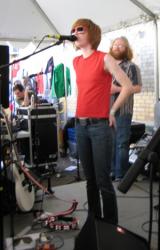 To capture the mayhem, giddiness, and manic good times of this year’s SXSW, I’ve put together my SXSW Superlatives (everyone deserves a reward!) to recap the choicest five days of 2008 yet.

I’ll be posting new superlatives every few days so check back for more ‘awards.’ Also, check out the SXSW coverage I was part of with our friends at Groupee. (If you missed the first part of this series, have at it.)

The awards for SXSW Superlatives Part 2 go to:

There were band names that made me gasp when I saw them on the schedule (all of which you can be sure I’ll gush about en masse soon enough): Los Campesinos!, Matt and Kim, The Judys, and Scotland Yard Gospel Choir.

The unsuitably named band that hails from Chicago wasn’t on any of the ‘official’ SXSW evening showcases, but rather they put all their eggs neatly in a 4p slot at the Bloodshot Records day party located about 20 blocks outside of downtown.

Walking 20 blocks in a new city is usually a treat; it gives me an opportunity to wander like a local and see things outside of the pristine tourist areas. But on the day of this party the temperature hit 95 degrees (even hotter than the iPhone weather channel could admit as the official high temperature of the day – note the temperature is 95 degrees, but the ‘high of the day’ is listed as 93 degrees) and about ten blocks outside of town I started to realize that everything was moving in slow motion and my beer-as-hydration plan (beer being free, bottled water being $3 a pop) wasn’t working as I had hoped.

Thankfully I came upon a ‘Dillo’ stop and the kind folks waiting under the shade confirmed the next bus traveled the ten blocks between me and that divine Bloodshot Party. Oh it was such a lovely site to see the #1 Dillo a block down the road and headed our way. Minutes later I found myself in line for a free beer and a spot up front for the Scotland Yard Gospel Choir.

Preceding SYGC was a fellow by the name of Justin Townes Earle (who earned the “I never knew bedazzling could look so sexy on a guy” superlative). As his name suggests, he comes from Americana music royalty. He grew up in Nashville with his father (Steve Earle) who named him after one of his heroes (Townes Van Zandt).

At only 25 years old he embodies the authenticity of Hank Williams and conquers hearts with straightforward old time country. He somehow bridged the gap to sweet talk country, rockabilly, and alternative folks with uninhibited vintage twangs and a Johnny Cash swagger. I certainly wasn’t expecting to be so taken with this gem (in a dark suit no less) of American Roots music who can sing coy-'cause-it's-country lines like “Your biscuit is big enough for me.”

Scotland Yard Gospel Choir took the stage (and stage right since they all couldn’t fit on the proper stage) with their seven-strong brood. It’s probably no surprise that the leader of the group who penned “I Never Thought I Could Feel This Way for a Boy” (I’m still surprised The Smiths didn’t write that song first) was donning a well-worn Morrissey “Greatest Hits” t-shirt and the drummer was wearing a shirt that simply read “Punk Sucks.” From repeated listens to their debut self-titled album, SYGC is a band that isn’t scared to share their thoughts on relationship troubles and librarian philosophy (and in this fashion case, musical leanings).

They started off the set with the first two songs from the album. From the onset of the first song, “Aspidistra,” they captivated with their twee-ish world charm in a scruffy candy shell. Their sound exemplifies their love (and influences) of all things Belle and Sebastian sweet and Billy Bragg fortitude.

I was close enough to follow along with their set list and although my dreams were dashed when they decided to skip “I Never Thought I Could Feel This Way For A Boy” mid-set because they were running short on time, I especially loved the new songs (at least new to me).

As they launched into “Libertyville or…” (a new song?), frontman Elia Einhorn took on the cap of a lounge singer making the audience swoon with each ebb and flow of his grandiose gestures (he put down the guitar for this song) and tender lyrical themes.

Next Elia introduced another unfamiliar song, “Ellen's Telling Me What I Want To Hear” (from the currently out of print I Bet You Say That to All the Boys) as the song that, when played on the OC, it paid his rent for three months and the TV show subsequently tanked. It’s that kind of wry humor and his swift bookish song-smithing (and I’ll admit the fuzzy beard and glasses help too) that bring to mind a strong resemblance to our very own John Roderick (Long Winters). The song reveals the voice of a heartbroken soul who vows to never have his/her heart broken again.

As the rushed set came to a close the crowd was genuinely aching for more. The band said that they their tight time slot was up and weren't allowed to continue (those SXSW stage managers run a tight ship!), but the applause and uproarious call for more continued. And, tadaa… a true encore occurred! The power of the people convinced the scheduling powers that be allow SYGC a couple more glorious songs.