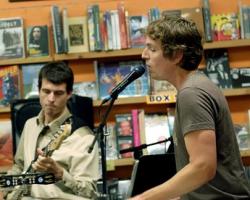 Central Services played an all-ages Sonic Boom in-store about halfway through the REVERB festival, so my fella and I went down to peruse some vinyl and hear the band, who I haven't seen in… well, I can't recall when the last (non-soft-rock cover night) show was. So, it was time.

And what a pleasant surprise! With the addition of Seattle-based solo artist Andrea Wittgens on keys and backing vocals, the band sounded more melodic, more charming, and more… somehow, complete, than I've ever heard them sound before.

To me, Central Services has long felt like they've been living in the shadow of local indie-pop band Math & Physics Club (the two bands have shared members, notably MAPC drummer Kevin Emerson, who drums and sings for Central Services). Perhaps it's because I knew and loved MAPC first. They've also held a special place in my heart as the finest players of 70s soft rock and Yacht Rock I've ever had the pleasure of experiencing (and I mean that without the teensiest smidge of irony).

Tonight's performance proved the band has a vibrant sound of its own. While the addition of Wittgens on female backing vocals did evoke a sense of Belle and Sebastian, Central Services' sound is less precious and fey than B&S (or MAPC, for that matter), at times reminscent of the mid-tempo melodies of the 70s soft rock classics they can emulate so well. At one point, after a particularly ripping (in an indie-pop way) guitar solo, Emerson quipped, "We searched on wikipedia to see if Thin Lizzy guitar solos were still allowed in this day and age." I'm not sure how many of the band's all-ages fans got the reference, but I chuckled nonetheless.

Overall, the set was a delight. Here's the setlist, for the superfans (and you know who you are, up in the front, hugging and dancing along):

And hey, we did find some awesome vinyl…. 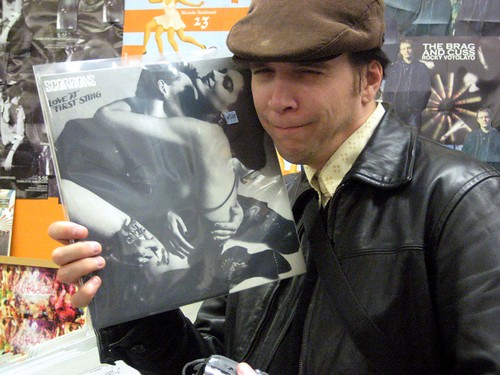