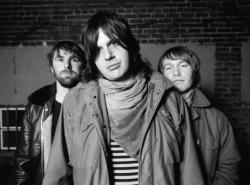 One of my favorite aspects of REVERBfest was the newness of it all: a first-year festival, featuring loads of bands on the cusp. These factors, plus the sprinkles of rain falling on grey Ballard, made for a manageable crowd size, and I loved how the small crowds allowed us to peek in the doors of each participating venue just for a song or two.

The Knast were the first band of the night I caught, and they were a great start to kick off the evening. They’re a relatively young band with local roots: lead singer A.J. was the former front man of Stagger Lee. I’d listened to a few of their tracks on their MySpace page before the gig and knew I had to make my way toward the Lock & Keel to catch their early set.

The three-piece play straight-ahead, pop-hooked rock 'n roll — perfect for the roguish Lock & Keel, which was populated by both music-hungry hipsters and salty sea dogs popping in for a pint. While we heard only a handful of songs, including a Clash cover (“Janie Jones”), my ears were intrigued by their Kinks-ish sound, and I look forward to seeing this band again at a headlining set in the near future.