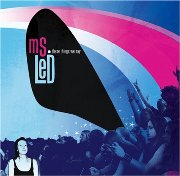 The REVERB festival was a time to both discover new favorite local bands (like Throw Me the Statue and the Kindness Kind) as well as revisit old favorites, like power-punk four-piece Ms. Led. It had been a good year since I saw the band, and in that time they've released another kick-in-the-pants record of feminist fury, Shake Yourself Awake.

The show opened with some comedy sketch, as did most of the REVERB sets (note to the REVERB planners: comedians are a tough sell. I'd pass on the comedic openers next year). I did find myself laughing in spite of myself at these two fellas coming up with pro-pot taglines… with quips like "Pot: it's like heroin for pussies" and "Pot: beat video games, not your wife!" I know, I know… I'm still not sure what made me giggle, except maybe the awkwardness of it all.

Luckily, Lesli Wood and co took the stage and the giggles — and the awkwardness — were blown away by the sheer magnitude of sound and energy they blasted from the stage. The band's newer material has a renewed sense of urgency and intensity that reinforced the name of the latest release: they certainly shook all of us in the crowd awake. Sadly, I could only stay for the first three songs before heading to the Sunset to catch Fleet Foxes (ahh, the beauty of the multi-venue music festival)… but my trusty cameraman and I did manage to catch a video of the rockin' performance before we left.