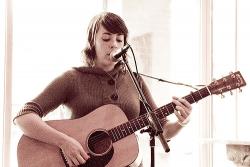 My first time seeing Troubletown was when she opened for Neal Burton/Fences at the Crocodile Cafe last month. Although I was friends with the two other bands, I had never seen nor heard of Troubletown. The result was one of those amazing live musical experiences where you instantly feel connected with an artist you never knew existed.

Jenna (or Troubletown, as she prefers to go by) played to a packed all-ages crowd at the Miro Tea room Saturday afternoon. Her voice has a quality I can't quite pin down or closely compare, yet it really captures an audiences complete attention. The crowd seemed slightly awestruck by her sweet, honest, acoustic songs and her lovely, awkward pre-song banter. My two favorites of the set were her songs "More" and "Paper Airplanes." Between songs she shared a hilarious story about losing her much needed cell-phone as well as her plans for the rest of the REVERB festival. She attracted several other notable REVERB artists to catch her set including Siberian, J Tillman, and Cameron Elliott of Battle Hymms.

Keep an eye for Jenna performing with Damien Jurado's band during his next live performance.