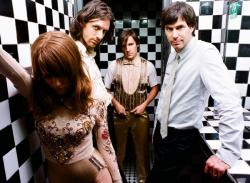 K, first of all, let me explain that I am a Rilo Kiley expert. Erik Gonzalez introduced me to them circa 2002 by putting "Paint's Peeling" on a mix, and ever since, they've been just about my favorite band ever. As such, I've seen them live many many times, and prior to their recent hiatus I had their playbook pretty much figured out. Their live shows would often feature instrumental intros and outros, little teases of older songs that morphed into newer ones, and a certain indie charm that made you feel like they were your pals. When they opened Friday night's show at Avalon with "It's a Hit," the same song they opened with at every More Adventurous show I saw back in '05-ish, I figured I was in for more of the same old Rilo Kiley (which to a superfan like me is not a bad thing).

It soon became clear that the band was not up to its old tricks; in fact, they had a bag full of new tricks that rendered them a whole new Rilo Kiley, a Rilo Kiley that no longer seems young and indie but instead was so pro and polished that their bona fide juggernautic rock stardom was unmistakable. And I, their biggest fan (ok, some may argue, but I'm writing this review so I win), was delighted, as was the rest of the packed-like-sardines crowd.

The band hit the stage dressed like the cast of a Fosse musical. Joining them onstage were Orenda Fink (of Azure Ray) on guitar and Kristen (of openers Grand Ole Party) on keys and horns. After "It's A Hit," they launched immediately into Under the Blacklight's "Close Call," and thundered through "Portions for Foxes," "Paint's Peeling," and "Breaking Up," on which Jenny Lewis made the cowbell sexier than it's ever been. The song, with its funky bass lines, was disco-licious, and showed a kind of musical maturity that totally sold me on the band's new sound.

I found that I really loved almost all of the new songs they played, and now I'm excited to get the record (I held off, opting to first experience the songs live instead). The one that fell flat for me was "Dream World," which followed "Breaking Up" in Friday's set. Usually I am crazy about the songs on which guitarist Blake Sennett takes the lead, but this one felt redundant, and in my notes I simply wrote "YAWN."

"Moneymaker" and "Wires and Waves" — the only pre-Execution of All Things song the band played — came next, and then the stage cleared out leaving only Blake and bassist Pierre de Reeder, who turned out a stunning duet on "Ripchord" with Blake on ukelele and Pierre on mandolin. Pierre then departed and Jenny came on to join Blake for "With Arms Outstretched," with full audience participation recalling the days when the band was still small-time enough to invite audience members onstage to sing along. These days they have a chorus of two thousand backing them up. In fact, during most of the show, the vocals were all but drowned out by the audience singing along at full blast.

The rest of the band returned and proceeded through "A Man, Me, Then Jim," "Silver Lining," and "I Never," which garnered a huge audience response and saw Jenny getting down on her knees at the end while she finished out her keyboard part during the song's reprise. Next came "Smoke Detector," on which Jenny displayed that although it may be true that she cannot do the smurf, she can indeed do the smoke detector. RK fans know what I'm talking about.

"Fifteen" came next, and then Jenny served up some of her solo material with "Rise Up With Fists," which, without the Watson Twins or Sarah Silverman, was okay but not outstanding. Not to be outdone, Blake took the wheel next and led the band through "Greetings In Braille," a song from his other band, The Elected. As mentioned, I adore Blake's material, and hold The Elected in the same esteem that I hold Rilo Kiley, so this was a big highlight for me. Jenny played melodica on this number, the inclusion of which I'm guessing may have been influenced by The Magic Numbers, who toured with The Elected during 2006 and who made the melodica hip. Regardless, I was thrilled for a brief detour into Elected territory.

Finally, the band erupted into "Spectacular Views," the final song from The Execution of All Things, which featured the crowd-favorite line "It's so fucking beautiful!" At the end of this song, they jammed out a bit on guitars while Jenny sang unfamiliar but relevant lyrics before bringing it back to "Spectacular Views" and ending the set on a ferociously high note.

Given that the band had played a solid hour and a half, and that Avalon transforms into a dance club after the rock shows end, thereby requiring a 10 p.m. curfew, my money was on no encore, as it was slightly after 10 at this point. But to my surprise they returned and finished up the night with "Does He Love You?"

Jenny Lewis has a stage presence that swallows you up and leaves you mesmerized. But it's the combination of her and the rest of the band — Blake, Pierre, and drummer Jason Boesel — that makes Rilo Kiley solid gold for me. They switch from one instrument to another with ease and nobody misses a note, while Jenny's flawless vocals soar through the venue. I have never left a Rilo Kiley show disappointed, and this may have been my favorite one yet. I'm still in love, and maybe more so than ever, with Blake & Jenny & Pierre & Jason.

My companion at the show, Mike Epstein (of Boston's The Motion Sick and Okay Thursday), found this link http://www.youtube.com/profile_videos?user=rottens304 to videos of the whole entire show, so if you're still not sure whether to love 'em or leave 'em, watch some of these.

It's A Hit
Close Call
Portions for Foxes
Paint's Peeling
Breakin' Up
Dream World
Moneymaker
Wires & Waves
Ripchord
With Arms Outstretched
A Man, Me, Then Jim
Silver Lining
I Never
Smoke Detector
15
Rise Up With Fists
Greetings In Braille
Spectacular Views (with new outro/jam)
Does He Love You (encore)