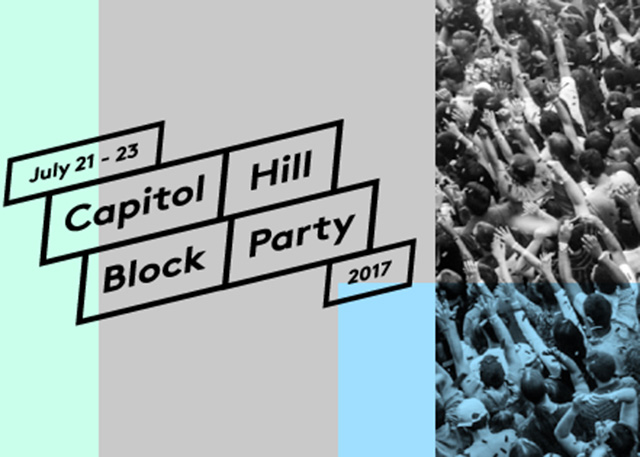 We’re officially in the thick of Seattle’s Summer music festival season and that means it’s time for block party again! It just so happens it’s also time to introduce a new writer to the team, Imaginary Adrienne! We’ll be taking on CHBP together this year with Adrienne acting as wordsmith and myself acting as image-smith(?) Check out our recommendations for the weekend below!

To quote Willamette Weekly, “Tango Alpha Tango is best experienced amid a crowd of sweaty guitar junkies.” Although I wouldn’t describe their music as “sweaty” there is something about their sound that evokes a thick, almost humid atmosphere–think New Orleans in the summer.

It’s a safe bet that this PDX trio are often compared to The Black Keys, but to leave it at that would be to miss the unique blend of dirty guitars, thick bass, and relentless drums that makes this blues rock group their own.

Stephen Bruner (aka Thundercat) got his start with punk band Suicidal Tendencies, and is now one of the most notable session bassists in the business, performing on recordings with the likes of Flying Lotus, Kendrick Lamar, Erykah Badu and Childish Gambino. His exceptional 2017 LP  “Drunk,” surprised many with his jazzy falsetto and chilled out soul beats, juxtaposed by dexterous bass lines and at times hilarious lyrics. Let alone the fact he featured both Michael McDonald and Kenny Loggins on one of his tracks. You do not want to miss this!

Listening to Austra’s darkwave synth pop is to be transported to a fairytale land decorated and populated by Guillermo del Toro. Their classically trained vocals slide and spin across rhythmic stepping stones of electronic sound, leading you away into a land of deep neon purples and blues. You can’t help but dance, even as you’re lulled far, far away.

For me, Austra can do no wrong. I’m just a straight up fan. Plus, they’re Canadian, which is like a beacon of light in the darkness that is the current American reality. It’s going to take everything in me not to grab hold of their ankles and scream, “Take me with you!”

Admittedly “Twin Peaks” obsessed Prom Queen would fit right in on a David Lynch film soundtrack. Their spooky ‘60s girl group sound sweeps from overtly epic spaghetti western to the eerie and intimate. They’ve been working on their aptly named third LP “Doom-Wop,” and I can’t wait to hear new jams from this local band.

When the heat off the asphalt becomes unbearable, head into Barboza for the AC and Seattle electronic duo Youryoungbody’s entrancing dark wave beats. Duh Cripe’s ghostly vocals will reverberate into your bloodstream while Killian Brom’s industrial beats are guaranteed to make you sway, if ever so slowly. Word on the street is they’ll also be debuting a new single this weekend!

Lizzo’s tracks have the type of catchy, satisfying hooks that flood your brain, filling the empty crevasses with expertly arranged vocals, undeniable rhythms, and masterful vocals. Speaking of vocals, to say that Lizzo “can sing” would be an understatement to bring the house down. Her skills as a vocalist will leave you with chills. No hyperbole.

If you wanna prepare for the awesomeness that is Lizzo’s live show, check out highlights from her SXSW performance on NPR. I did, and I got the aforementioned chills.

“In a world where Death is Certain, it is our responsibility to live in the present moment and enjoy life before the inevitable End,” says Year of Death’s “About” section. I’m super into this sentiment. In fact, I’m pretty much down with anyone who is that practical and positive about their eventual embrace of the void.

The void doesn’t seem too far away while listening to Year of Death. Their arpeggiated synths and electronic beats mesmerize through glorious repetition, highlighting the dark beauty of their tracks. Meanwhile the vocals smooth a path for the listener to follow. This is a world reminiscent of John Carpenter, clothed in shadows and sidelong glances. This is the Year of Death.

Singer-songwriter Angel Olsen snuck up on me, seemingly appearing out of nowhere in the last few years. Her delicate voice is at times Hope Sandoval-esk, lilting above calmingly sweet indie rock love songs, before abruptly crashing into your body on punk tinged waves. If ever there were a modern day siren luring ships at sea to their deaths, Angel Olsen would be it. I haven’t seen her live before and I am ready to be HAUNTED!

There is something almost delicate about the work of Perfume Genius. Before my writing teachers get on me for qualifying my adjective instead of finding a more accurate word, let me explain myself. When I call Perfume Genius delicate I mean like a fine lace woven from piano wire.

Though exquisite arrangements are a staple of Mike Hadreas’ work, the specifics of those arrangements shift with the needs of each song. On the most recent album this can be heard through such tracks as “Otherside” (highlighting the profundity of a simple piano line) and “Valley” (guitar performed at waltz tempo). But through it all Hadreas’ never fails to bring heart to his unique brand of indie pop/rock.

“Seduction is also spellcraft,” it says on Perfume Genius’ Block Party page. I look forward to, once again, falling under Hadreas’ spell.

We’ll see you out there in the trenches block party. Don’t forget to hydrate you guys and follow us on Instagram for some fresh from the pit pics! FRESH.