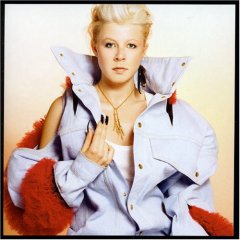 I know it sounds crazy, but Robyn just may be the Sam Cooke of our generation. They call her the "Anti-Britney" but that just seems another way to put a fading star down; a better contrast would be how Alanis Morrissette or Tori Amos evolved from bubblegum puppets to what we know them as. Only with Robyn, the music is a bit less mainstream in the result.

The cute-tough white-haired sprite's songs are confidently soulful, and it all sounds effortlessly true to Robyn herself, who doesn't hesitate to let you know who she is (or who she wants you to think she is, I guess). She comes off as if telling anyone who wants to push her around to Piss Off. An electric awareness of self-image similar to Beth Ditto's is implied, and if it's not real, at least that perception has become something valuable for women to declare ("I'm only sexy when I say it's OK" in "Who's That Girl" — no, it's not a cover). This of course means record labels, producers, and anyone trying to keep a tough young lady down. Which, in fact, has apparently happened plenty. Aesthetically, her focused self-determination seems a little overbearing, until the charisma of her voice and the sly charm of her lyrics combine with the catchy keyboard-and-drum machine music to curb-kick down your resistance. Or mine, anyways.

Robyn's been working it since 1995 (which, from the photos of her slightly androgynous, very tight, white-haired image, must mean she was a child prodigy), perennially releasing songs in her native Sweden (and spreading like the bruise of a vampire kiss throughout Europe). And yet this fourteen-track full-length sounds as sparkling green as any of the best pop debuts of the past thirty years.

As such electronically-dominated hip-hop soaked tracks like "Konichiwa Bitches" and "Cobra Style" and the 80s-style lush anthems "With Every Heartbeat" (another non-cover) and "Be Mine" (etc.) sear their melodies into your brainpan, you might be thinking this whole thing was world dominance by music biz committee. But no, it's just Robyn, storing up more wonderful hooks and images each time some label hack told her "no," I imagine. Thus her bursting onto the scene at SXSW this year — and now the buzz-foam this album comes floating in on. It's as fun, smart, and sizzling as the hotly debated work of other recent femme fatale songwriter-performers, but what's even better is that it seems like Robyn is keeping her shit together long enough to enjoy such success. There's a song called "Crash and Burn" here, and it's definitely a taunt to competitors than evokes a possible self-fulfilling prophecy.

I have to admit, about two-thirds of the way into "Robyn" I sort of lose focus as the retro-pop songs pile up, but maybe it's because the first half is so damned good. (And who knows, maybe you'd rather hear her sing than rap.) At least half a brilliant album (especially a debut) is tons better than most artists can accomplish these days.