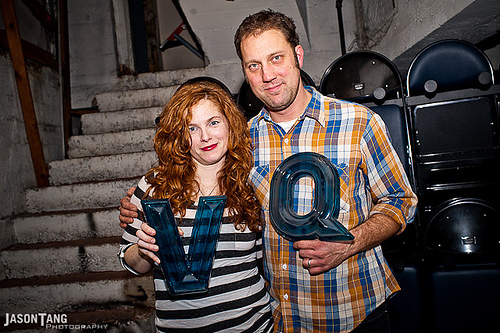 We haven't been the same since Visqueen rode into the sunset last November, when they played their last show at the Neptune. It was a glorious affair.  Every song rocked like it was the first time we heard it.  Genuine love and appreciation (on both the part of the band and the audience) filled the air and as the final notes of the last song we're strummed, we all broke down into tears.  Sure we were sad that we'd never get to see another Visqueen show or pick up another new Visqueen album, but mostly the tears were grateful ones, that we were there and they were there and we were all together sharing this amazing moment of rad songs, rad people, and BFFs forever (video proof below).

BUT, come Friday, June 1st at our 10th Anniversary Rockstar New Wave Karaoke Bash at Chop Suey {tix}, dry those tears and wildly spray your Aussie Scrunch hairspray, because Ben Hooker (and possibly a member or two of his entourage) will take the stage to sing a favorite new wave hit.

You might remember Ben's karaoke skillz as illustrated in his spot on performance of Iron Maiden's "Aces High" (with Cory Murchy of Minus the Bear) at our 2003 Rockstar Buttrock Karaoke Party, a performance which earned him the award for "Best Falsetto."  This time will be even better, because we will be celebrating a wonderful 10 years of imaginary togetherness (a love affair detailed in the 10th anniversary imaginary zine, which you can be the first to pick up AT THE SHOW!).