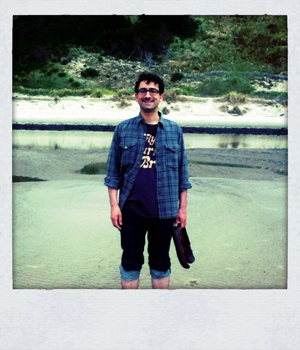 It's hard to remember imaginary life before Math & Physics Club came along.  We are forever honored to have been one of the first places they sent their demo to back in the summer of 2004.  With their sweet indie-pop blend of The Smiths with The Lucksmiths, and all things Sarah Records with Matinee Records, their beautiful songs (even as demos) immediately made us both jump with glee and fill with pretty heartache.

Besides being hella nice folks who write hella nice songs, we adore them because they have been kind enough to be a part of many of our (even wackiest) show endeavors.  They are brilliant when they play their own songs (as we've written about countless times), but they are also really great at covers! They did a couple magic Magnetic Field covers at our 69 Love Songs cover night and they even perfected a Stone Roses cover at one of our showcases (video of them performing it in CA below).

Ethan Jones from MaPC is going to represent the band on at 10th Anniversary Rockstar New Wave Karaoke Bash on Friday, June 1st at Chop Suey {tix}. You might also remember Ethan as a touring member of Eux Autres in addition to his MaPC responsibilities of bass guitar and harmonies.  Besides rumors swirling that MaPC are possibly talking about one day maybe recording something perhaps sometime, Ethan is also currently working on an EP of his own.  And, also of very important indie-pop note, Math and Physics Club donated a very rare and very exclusive song to the 10th anniversary commemorative imaginary zine, which you can be the first of your friends to pick up AT THE SHOW!

He was one of the first folks to send over their requested song, so we can only imagine that he's spent ever single moment working on his new wave poses.