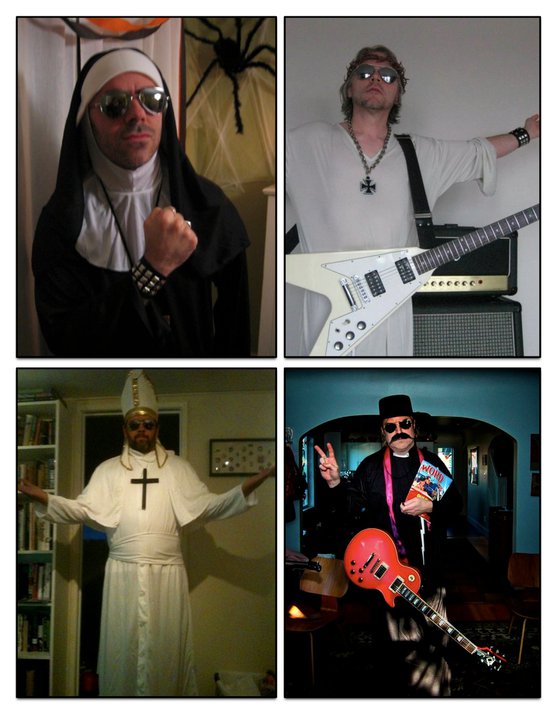 The Mangles are an illusive group of guys.  We were lucky enough to meet them in TIG's infancy and immediately BFF'd over all things vinyl, indie, and rad.

Even though the group only comes out of their Mangle den a few times a year, it's always to the extreme delight of all at the show.  Whether they  use the moniker of The Mangles or the long-retired Scottish Men of Science or as some of the fellas behind Blue Disguise Records (responsible for the early Visqueen releases, among other things), they treat every show as a covert basement show, bringing everyone into the fold of secret handshakes in the name of an authentic college-rock show, minus the attitude and fake poses.

Beyond that, they translate their genuine love and respect of everything from Linda Ronstadt to Quasi to Hüsker Dü into an unforgettable performance that reminds you of the giddiness you felt the first time you snuck into an over 21 show.

Their songs gather a most exquisite range of influences, from The Replacements to The Bangles to Gang of Four to the Clash.  They are smart guys, and their writing and performance style reflects that (and I'm not just saying that because they are responsible for writing the best song ever, "Liz Riley").

They've taken the TIG stage in the past, notably at our 2008 Holiday Spectacular, 2004 Shamrock the Vote show (at which they were an all-boy Bangles tribute band) and on the karaoke mic at our Suicide Karaoke show to mark our 2nd anniversary.

We're not sure what song they are going to do this year at our 10th Anniversary Rockstar New Wave Karaoke Bash at Chop Suey {tix} on Friday, June 1st, but we know it's not to be missed!