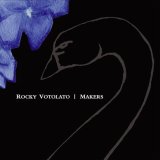 Makers, the latest album from Rocky Votolato, is his strongest to date and shows that the softest-spoken member of the Votolato musical family deserves a spot alongside Ben Gibbard, Dave Bazan, and Elliott Smith in the annals of great Northwest singer-songwriters.

Votolato has a voice that makes you hinge on every word, and he picks up where Elliott Smith left off as the poet laureate of the Northwest music scene. The tender vocals and introspective lyrics make him one of the finest storytellers with a six string. Considering his musical pedigree — with one brother screaming his way through the all-ages scene as a part of The Blood Brothers, and the other doing great work gigging as Blue Checkered Record Player — it's no wonder his presence resonates so majestically throughout the local music scene.

The music on Makers is comprised of acoustic guitar, harmonica, and drums — the typical Votolato fare. It's chock full of wonderful ditties about life, death, love, happiness, and all the frustrations and joys that come with them. Each song is beautifully crafted with sparse instrumentation and gorgeous phrasing, including such verbal gems as, "I'm a punch line who's punch drunk with my fist in the mirror" from "Portland Is Leaving." When he sings about, "The trailer park in the old mining town where the irony is laying thick on the ground" on "Goldfield," you want to be there in the dead end town that is the song's namesake.

Makers ends on a somber note with its title track. You can nearly feel the sorrow and pain in Votolato’s voice as he opens with the deceptively simple lines: "Death keep calling me. She's going to set me free." The song embodies everything that makes this his best album. It's a beautiful story created by Votolato's fine song crafting set in the backdrop of his simplified soundscapes, which pretty much sums up all of Makers' 12 tracks in a nutshell.