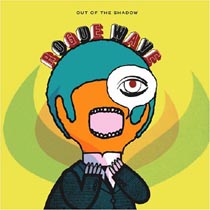 Out of the Shadow

I kept trying to give Rogue Wave’s debut a listen on a recent vacation to SoCal and Vegas, and it seemed impossible. I was constantly distracted from the music, my focus not able to concentrate. Once it was in my stereo at home, on a finally cooled off day in Seattle {a climate very similar to San Francisco, from where Rogue Wave hails}, I finally realized why: in that serene setting, it worked. The music was too complex, requiring a deeper ear, than hot-weather places could handle. {Now, if you are reading this in Phoenix or L.A. or even Madrid, my apologies — you may still like this music as you're acclimated to the local climate and can multitask. My senses, on the other hand, were simply too overloaded with sipping water and shielding my eyes from the sun to let my ears free up and hear.}

The melodies on Out of The Shadow {an ironic title, given the above} are beautiful, the songs thick though gentle. To truly appreciate this band you must hole up with headphones — or at least situate yourself in a room where the music can be the sole focus. Then the complexity, the layers, the intricacy of the record presents itself.

"Out of the Shadow" spawned from a soul-searching trip of frontman Zach Rogue's to the Big Apple. In NYC he penned and recorded the material for the record, returning to SF to quit his existing band Desoto Reds and find new musical companions. He lined up Pat Spurgeon {drums/keys/samples/vox}, Sonya Westcott {bass/vox} and Gram LeBron {guitar/keys/vox}. The new quartet prepared Rogue’s material for release, and the original incarnation of Shadow was released in limited quantity on the band's own label, Responsive Recordings, last year. It has now been remastered and re-released by Sub Pop.

The album flows seamlessly through its 12 tracks, starting with a lilting rock tune set to a waltz beat {"Every Moment"}, transitioning into the slightly addictive melody line of "Nourishment Nation" {it's like Tetris — repetitive and satisfying} into the reflective country twang of "Postage Stamp World" and closing with the charming "Perfect." The record is a throwback to 1960s pop brought into the modern age. The mass behind the quiet subtlety is startling. Give a listen.