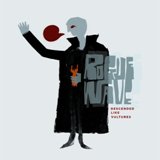 It's been a mighty long time since I deferred to the almighty Dictionary Definition Tool to start a piece of prose. It's a trite trick I normally don't consider (my former j-school professors would have a heyday with the thought of it), but in the case of Rogue Wave, I've made an exception. The band and the phenomenon are sublimely aligned; the group's name an apt choice for its chartered course across the pop music sea. All this to say, let's share what their moniker means, in the etymological sense:

Rogue wave: a freak wave. Freak waves, also known as rogue waves or monster waves, are relatively large and spontaneous ocean surface waves which can sink even medium-large ships. Once thought to be only legendary, they are now known to be a natural (although relatively rare) ocean phenomenon. They are a likely source of the sudden inexplicable disappearance of many ocean-going vessels. (Courtesy www.wikipedia.org)

The band Rogue Wave, like its namesake, is a surprising force of nature built on tension and release, grit and glimmer, dark and light. Just as a freak wave eventually thrashes into serene quiet, so, too, is the sonic ebb and flow of Rogue Wave. They (the band) have come onto the scene with surprising strength and natural talent, comprised of a seemingly star-aligned batch of musically like-minded souls. This Oakland quartet have a knack for inputting unexpected, almost ugly sounds into gorgeously melodic song structures, resulting in a cacophonously pretty symphony. Dissonant chords and jarring rhythms play harmoniously alongside classical arpeggios and vocal choruses that belong in a Sunday sermon. It's a wonderful embodiment of tension, release and resolution.

Rogue Wave's first album, Out of the Shadow, was not so much a band's effort but instead Zach Rogue's solo project rounded out with a backing band. Listening to Out of the Shadow, it's not easy to detect that its contents are the handiwork of one gentleman — the band sounded unified, and in live shows they give nothing but their all as a unit.

With Descended Like Vultures, all four members of Rogue Wave created the songs together. The sophomore effort is more developed than its predecessor, but despite its bigger sounds, it's striking how much it retains the intimacy of the debut. The members of Rogue Wave — Zach Rogue, plus multi-instrumentalists Pat Spurgeon (focus: drums), Gram LeBron (guitar) and Evan Farrell (bass) — not only crafted this album, but they wrote an abundance of material in prep for its recording — three albums' worth, in fact. Considering that, the content of DLV should be the cream that rose to the top during the track selection for the record.

It mostly is. A few selections are a bit shaky, suffering from too much production, which ends up overshadowing the raw quirkiness of Rogue Wave. But the bulk of Vultures' material is a collection of free-flowing, poppy, melodic bliss.

"Publish My Love," in shoegazer glory, swells, swirls and soars into a mad crescendo of beauty, toppling right over itself into the intimate "Salesman On the Day Of the Parade." The masterful "Love's Lost Guarantee" melts my heart before it slides right into the jammy "10:1", the first — and most over-produced — single off Vultures. The lullaby of "California" closes with a Zeppelin-lifted, quiet guitar progression that serves as the perfect outro. In fact the spirit of Plant, Page and company wafts through Vultures, providing a subtle throwback vibe as did Out of the Shadow. Lyrically, Rogue continues to narrate heart-aching tales of humanity.

The finished product makes Descended Like Vultures the soundtrack I'd want accompanying me should I ever find myself descending into the inky blackness of Davy Jones' Locker for all eternity. It sounds morbid, but, good golly, Matey, imagine the thrill.