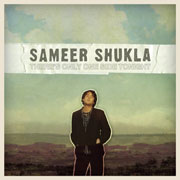 There's Only One Side Tonight

The record starts with a three-punch trio of quick confections: "Carry The Pennies," "Emily," and "The Sum of You." On the first few listens, it seems like he's stacked the best up front. Later on, repeated plays reveal further depth with simply less obvious hooks on jaunty lamentations like the title track and the should-be-a-single, "Cheap, Cheap Moon."

Giggling on the gallows, brittle pop-baron Sameer Shukla commiserates with listeners about a once-glamorous world where the final glitter is being washed off at dusk, and all the bars are filled with hookers, peering with wet, whiskey-yellowed demon eyes, mingling with his own afflicted, constrained adoration. Sight itself is a lyrical preoccupation for There's Only One Side Tonight, as references to eyes and eyelids occur throughout, as if to say, "All is vanity."

Through a-bit-too-manicured-sounding hard-candy pop, the bitter centers of "Cheap, Cheap Moon" and "Jack Daniels' Eyes" and "Hug Chaser" never taste ennui-stricken, but more like various impeccable flavors of unrequited ecstasy, a thousand times more painful than vague meaninglessness. "Carry the Pennies" should be just an attention-grabbing opener, but leaves lines like "Pride's just a bitch as well – hiding behind your name – You need not worry about fate, because bones will never break," behind in the subconscious to disturb. In other words, there's no place to disappear, and time catches up to all of us, inevitably putting each one in the ground.

Though lacking any could-have-used-some rough musical edges, There's Only One Side Tonight features a more original voice and better playing and production than 90 percent of the way-overproduced alternative pop-rock the majors are marketing. Catch Shukla playing locally, and invest in a first album that exhausts others for inspiration. (And of great Dolour style pop: alert! The record was produced by and with arrangement help and musical accompaniment by true star and wizard Shane Tutmarc, and mixed by United States of Electronica's Jason Holstrom. Tutmarc is all over this thing with his wonderful instrumental contributions!)