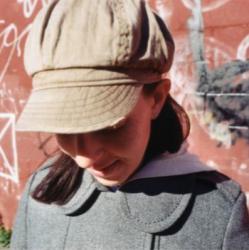 Rosie Thomas at the Echo in Silverlake

My trip to the Echo in LA's hipster haven Silverlake to see Rosie Thomas was so unexplainable that I've been shamelessly putting off this review for the past few nights. I'm still halfway at a loss of figuring out what to write that would convey the experience to anyone who A) wasn't there and/or B) has never been to a Rosie Thomas show before.

You can start off the way I did by visiting her Myspace page, listening to a few tracks, and forming some kind of preconceived notion. At least that's how I assume these things go for most people these days. I listened to her songs before I went to the show and thought, okay cool, acoustic guitar: check. Nice soothing voice: check. Records with Sufjan Stevens: check.

When I got to the show I was randomly befriended by a group of college students and grad students from the LA area who were apparently really into Rosie Thomas and who thought that I could get them backstage. They knew much more about her than I did, but they were still surprised when the first thing she gleefully said to the audience was, "It's great to be here…I just had a margarita! You could pinch me and I won't even know it!"

So, with my preconceived notions chucked out the window right from the start, I settled into one of the comfy leather couches for what has to be the strangest show I've ever been to. Thomas' performance was completely stripped down to two acoustic guitars, the other played by a shy-looking man whose full name I couldn't understand no matter how many times she mentioned it. But the most jarringly humorous part was that her speaking and singing voices couldn't be more disparate – her cartoonishly high, girly voice seamlessly giving way to a stronger, classical voice and then going back and forth between the two.

I got the feeling that most of the audience was actually there for the opening act (Thomas) rather than the headliners, El Perro Del Mar. This wasn't surprising, as her singing voice was incredibly engaging and it was easy to focus on the lyrics without more than two fingerpicked guitars in the background. The best song of the evening was "Much Farther To Go" from her fourth release These Friends of Mine; the song is essentially an ode to the loneliness of New York City in winter, in which Thomas sings, "I lost my way back home when I lost you." After the song was over, she dedicated it to a lucky man named Josh Meyers, who was somewhere in the darkness of the audience that night.

Thomas also played songs from her older releases and even threw in the most calming and beautiful cover of REM's "The One I Love," which unfortunately didn't have the added bonus of Sufjan Stevens' voice on it like the recording does, but was still great when performed live with the anonymous male guitarist/back-up vocalist by her side.

If you ever go to a Rosie Thomas show, just expect that he same woman who is on stage singing about the intricacies of her life and relationships will still take the time to school the audience on the topics of (I kid you not) renting porn with your parents, making balloon animals, and having the urgent need to go to the bathroom after the next song. But she's so ridiculously charming and self-effacing – like any good indie rock girl – that you'll just feel like you paid to see a stand-up comedian and a really great singer-songwriter all at the same time.