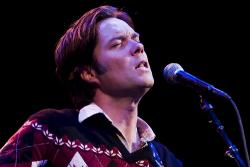 Rufus Wainwright at the Paramount

Mr. Rufus Wainwright calmly took the stage a couple minutes past 8:00, taking time to gaze around at the people that had come out to see him, clad in a conspicuous navy and maroon winter sweater.

I was grateful for Wainwright’s brief moments of humor and self deprecation. It made his otherworldly self seem more human. “I’m just trying to relate to you guys!” he sighed lazily. Particularly humorous was when he stopped and sighed “Uh… I forgot the words…” during one of his more poignant songs. Expectedly, the audience gamely burst into laughter. Like I said, without these moments, he just wouldn’t have seemed real.

“Going to a Town” (a song about which Wainwright claimed, “I just sat down and wrote like that!”) and “Vibrate” were among my favorite songs of the night. His bubbly and flamboyant manner was unexpected given the dark nature of a lot of his songs. His gorgeous, trademark warble and classical piano styling always sounded lovely coming out of my iPod earphones. Hearing his songs live had to be one of the most beautiful musical experiences I’ve ever had. I think I can honestly say his performance is already up there in the top three shows I’ve seen in my life.

“I was in Hollywood last night, I played a thing there,” Wainwright recounted to the audience. “Jake Gyllenhaal and Reese Witherspoon were there. True story, right after I finished playing this song, Jake threw Reese up against the wall — she’s tiny — and started making out with me!” he said with a chuckle that annulled the entire discourse.

"This song is about the years of teenage innocence and how those times are forever gone… so it’s a really upbeat song!” he offered as he started into a song in which “Zebulon” was the main character, and effortlessly transitioned into “Cigarettes and Chocolate Milk.”

The night’s hour and a half set ended all too fast. He came back on stage shortly after he left for the encore and lauded the audience with a beautiful rendition of “The Art Teacher,” among my personal favorites in Wainwright’s expansive repertoire.

“The Bush era is over,” Wainwright stoically pronounced before launching into "Gay Messiah." “This song has now been downgraded to protest song.”

From where I was squatting behind the barricade (I was too entranced to return to my seat after shooting the first 30 seconds of the first three songs), I could see his reflection in the piano. To my right were a group of people that claimed they were following Wainwright on this leg of his tour. If any an artist was ever worth spending so much time and (gas!) money following, it is Rufus Wainwright. Wainwright has already established himself as a venerable force in the music world; to pull off a solo show in a venue like the Paramount is no small feat, but Wainwright made the venue his own. It seemed by the night’s end, every crevice in the hallowed theatre had been filled with the warmth of his voice. “Yes, you will believe in love,” Wainwright sings in “April Fools.” After this live show, I think he’s right… yes, you will believe in love.