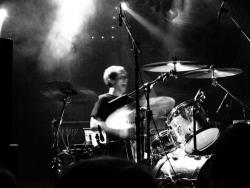 I'd made somewhat of a habit of catching The Helio Sequence when they played the haunts and dives of Portland supporting their first two albums: tiny shows with tiny crowds, opening bands that were even more unknown, good beer and dark corners. Standing so close to the two-man orchestra that is Helio you could literally feel the music move you, your innards quiver at the low end and your teeth squeak at the treble. Watching Brandon Summers try to wrangle his bucking Telecaster as it squelched and pinged, gaping at Benjamin Weikel as he punished his drums like they owed him money, neck on a loose hinge, heaving his head to and fro like a screen door in a hurricane. It was always a good show, always.

It's been a few years since those tiny clubs and paltry merch tables, they've been on a long, deep and very real ride, so when the men of Helio Sequence took the stage at the Crystal Ballroom like they'd done several times before it was at once surprising and befitting that the house was packed to the rafters. Sure, some of it could be due to the cheap tickets provided by local alt-rock station KNRK who sponsored the show and billed it as an "I Saw Them When…" affair, but the static in the air proved that the real draw was the reputation of the band and the ever-building praise of their latest invention Keep Your Eyes Ahead, a red-letter album for the band, marking their journey into the cold embrace of real life.

As is traditional for a band pimping its latest endeavor they started the set with the seamless opening trio "Lately," "You Can't Say No," and "Captive Mind" just as the album does, following up with a welcome nod to their solid 2004 release Love and Distance; the comparatively cheerful "Don't Look Away" and "Let It Fall Apart" and the crowd-pleasing "Harmonica Song".

Sadly the crowd, at least from the area I chose to take in the show, decided to take what could have been a touching and intimate performance of the gentle "Shed Your Love" and instead use that time to discuss whatever the hell happened to be popping up in their minds at the moment and the show seemed to stall as half the crowd couldn't hear the song over the other half of the crowd yammering to itself. Things picked back up once the "full band" returned on "You Can Come to Me" and "Hallelujah," which moved smoothly into a ambling rendition of "Everyone Knows Everyone" and a surprisingly un-digital sounding version of "Keep Your Eyes Ahead." Act one ended with the always invigorating "Square Bubbles" and its face-melting climax.

The encore saw Brandon return to the stage alone to perform "Broken Afternoon" to a slightly more attentive audience and was after joined by Benji for a searing and appreciated cover of The Beatles "Tomorrow Never Knows" as found on their first album Com Plex; it was a powerful number and was easily the highlight of the evening.

The Helio Sequence had always been a band with great ideas, flawless execution, and genuine energy but this time around, with the lessons of life scarred into them and the wisdom of a few more years around the block, they seemed less like a "local" band and more like true headliners. Their new songs have a maturity and a gravity that their earlier music had yet to explore, the difference between idealism and reality, the sounds of the rite of passage as told by two men who can look back on a decade of creation and chuckle knowingly to themselves at their innocence and youthful exuberance, now wounded by time but no worse for it.