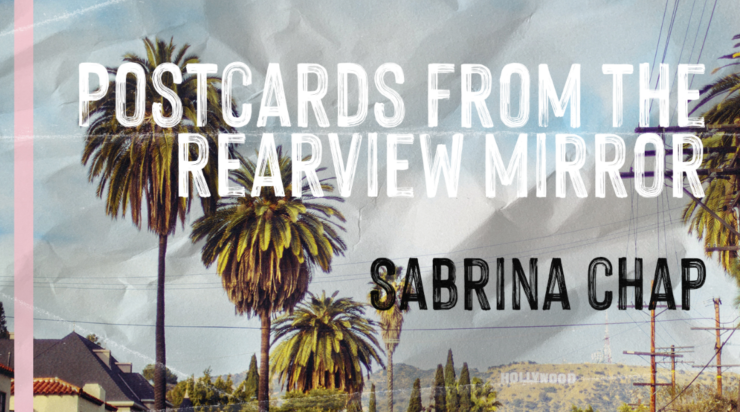 Y’all, one of my favorite artists has a new album! “Postcards from the Rearview Mirror” is Brooklyn-based Sabrina Chap’s third full-length album – and it’s a beautiful departure from her usual vaudeville/cabaret-style tunes.

This narrative indie-rock album tells the story of two queer teens who leave home together for the bright lights of Hollywood. Each song starts with Chap reading a postcard sent back home to “R,” describing their adventures in Los Angeles.

As we move through each of the songs, we experience the narrator’s coming-of-age; listening to the heartache and eventual heartbreak she goes through; the hopes and dreams of her youth falling away as she faces the reality of city life and loses the woman she loves.

Chap recorded all the electric guitar, organs, vocals, and synths in her bedroom, and enlisted musical mastermind David Engelhard (Soft Sirens) to program the drums. Bobby McCullough sat on Chap’s bed while recording bass, and Sarah Miller provided backing vocals on three of the tracks.

“Postcards” is an album that will leave you aching with memories of your youth. A PJ Harvey-esque musical with driving guitar, furious keys, and Chap’s throaty, gorgeous vocals – the perfect soundtrack to scream-sing along with on road trips and furiously dance to at full volume in your underwear. I can’t really even call out my fave tracks, because they all need to be listened to, in order, to get the full effect.

“Postcards from the Rearview Mirror” will be officially released on Bandcamp October 15. PURCHASE AND DOWNLOAD, FRIENDS!

For a preview, check out the video for “Hate Becomes You,” directed by Anna Hovhannessian: