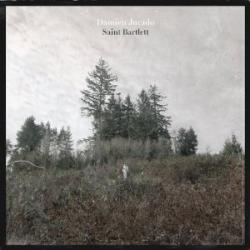 “I wish I that I could float up from the ground / I will never know what that’s like,” are the first lines on Damien Jurado’s latest record, Saint Bartlett, but it takes repeated listening to hear what he’s saying. Not because his voice is muffled, as he and production collaborator Richard Swift have created a gliding, string-swollen tune that is very memorable and Jurado’s sing-song voice floats in it like a crystal clear cross-current. It’s when an initially annoying, distracting vocal repeats much of what he sings that the meaning of the song goes from someone imagining flying in reverse; it’s about someone crashing. “Some day these hospital stays get the best of me / Trying to fix my mind / Trying to work it out, still trying to fix my mind.”

Saint Bartlett opening track “Cloudy Shoes” does a rare thing in pop music, creating a dragoon of hooks while getting under the skin; pushing the listener away just as the story pulls them in. It’s one of Jurado’s boldest mid-tempo pop songs, and the fact that he and Swift would allow the cracked inner life of its character to possibly hinder its potential for popularity by displaying it as a forthright effect is unsettling.

Nothing else on Saint Bartlett is as filmic, but more than half of it is still lyrically evocative, vocally disingenuous and vulnerable at the same time, and chillingly crafted to the casting of each track. Another statement of hiding or escape set to a geographical title of place, the next song “Arkansas” is a gently croony, early 60s big pop song with a Phil Spector back-beat. Like the well-disguised direness of the protagonist of “Cloudy Shoes,” it s someone watching their life “fade out, this is where the credits roll / Oh man.” Those final two words seem flippant, just a dangling commentary after the main action. But they’re hard and heavy with the results of losing control. Of being too tired to pick up all the pieces Jurado’s character counts as they fall. It’s the contrast with the pleasures that came before that make it so painful: “Taller than trees and brighter than starrlight / I never threw magic unless I was with you.”

“Rachel & Cali” is much closer musically to what Jurado’s done before, but it’s still evolved from the salient Seattle mumblecore Sub Pop veteran Jurado helped invent in the 90s in its use of bubbling bass and jittery guitar jangle and keyboard drops of cold rain. An almost Elmore Leonard-style exchange of terse dialogue between two young people who are tied together, but one of them is doing most of the work in the relationship. Cali fears people, she says, just from what she might do. Rachel is constantly put in the position of protecting Cali, giving her an escape route, keeping her warm with a blanket. Like Squeeze’s “Up The Junction” there’s no chorus, just a story that can lead no where else but abandonment of one of the players, and things end abruptly.

The intervention comes in the very next track, in possibly the best song on Saint Bartlett, “Throwing Your Voice,” which connects back to the disassociation of the singer in “Cloudy Shoes.” The title even seems to reference the use of that song’s disturbing vocal effect. “Michael” is being protected, by people willing to “throw his voice” for him. Human beings are meat puppets in his tornado lifestyle, in which manipulation is the only useful human value. People still love him, in spite of “blood on your hands, leaving your mark.” It could be this is someone singing this to the character in the first song, who perceives himself as a victim, or even a hero, because he foolishly believes it’s all about “changing if you want to.” The worst hypocrite would be someone decimating personal responsibility by scapegoating someone else for their own moral failure, which is always a case of “throwing voices.” The worst thing about the accusation of this song is that it doesn’t sound viciously dismissive like “Tear Your Playhouse Down” by Graham Parker or “Positively 4th Street” by Dylan, but that it is understanding and bored shitless by Michael’s games. We’re just not that into you, Michael, no matter how much you insist on being the center of the universe. You lost the plot, no matter how many battles you crave to win or blood you wish to spill. Jurado’s voice makes him sound simply pathetic, a cop who never knew what the law is for, a priest who never felt the spirit, someone in it only for the power and having no love at all.

The rest of these songs are mostly spaces of retreat and exasperation, romantic relationships and families torn and tossed about by the bad weather of living. Thus freedom becomes a curse for most of the inhabitants of “Kansas City,” “Wallingford,” “Kalama,” “Beacon Hill,” and the other stark highlight of Saint Bartlett, “Harborview.” The latter is as haunting as a classic antediluvian-sounding Fairport Convention dirge, reminiscent of something Sandy Denny would have sang aeons ago. If you’ve ever spent the usual five hour wait in the ER with a rasping cough or oozing wound to end up not seeing the doctor at the Harborview (“speak for me would you, I have nothing to say”), this doesn’t even have to be another chronicle of the descent into mental immobility. “Send Judas before them / With thorns in your side.”

Repeated listening to Saint Bartlett reveals just how deft Jurado has become as a songwriter, now able to pull off the vocal and musical of drama of “The Falling Snow,” one of his loveliest chamber threnodies, Swift making sure the strings come in perfectly as someone always falling starts to ascend. Realizing how note-perfect all these tone poems of anxiety are just makes the fucked up vocal trick on the opening track all the more audacious. Saint Bartlett may return to the same kind of places Jurado’s characters have been spinning their wheels in for years, but the dark points of illustration defining them from the dim, hazy surroundings they struggle against have never been more precisely rendered. “I lost my voice, you lost your mind,” Jurado sings in “Beacon Hill,” and this polarity would be only friction if the smoke made by the soul-burning on Saint Bartlett wasn’t so lovely. But it’s very, very lovely.