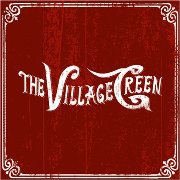 There are bands trying to profit from the fecund fields of 60's aggressive pop and garage rock, and then there are rock bands that harvest their creative inspirations from that decade and make music that could have been made any time after, but with the same unpredictability, melodic sensibility, and shocking lyrical confessions that define the best of that era. Village Green fall into the latter category.

Portland, Oregon's latest riff-leaders show on their debut self-titled EP that the 60's are a great jump off point. They jump up and rave down in a pre-metal fashion, with hints of grunge years to one day to come. Though avoiding overt Oregon moss-back garage grime in tone and briefly touching on the lilt of the Beatles musically ("Get Up, Get Out, Get High," "Plastic Woman" and the cabaret bounce of "Under the Covers"), it's when they settle into a delicious near-Blue Cheer grind on the opener "Let It Go" or "C'Mon!" that they show more sack than any current similar-goaled English or LA band.

The songs of vocalist and guitarist J. Nicholas Allard are more subversive than their retro-contemporaries as well, and a happy sounding sitar-style sing-a-long like "Get Up" may start off about how "everything is great," but ends up a nasty ode to disappointment and decay ("get up, get out, get high — everybody knows you're going to die"). Dave Depper and Nathan Junio shift between strings and keys exceptionally, which must be fun to watch live.

This veiled but stark realism of the songs and the actual ability to wrangle a set of couple chords into mordant wall-shaking shows that The Village Green have no urge to be pushing ear candy. They may sound like they keep it reasonably clean, but there are glimpses of a gritty, vulgar, bitter underbelly to this band that I wholeheartedly encourage.