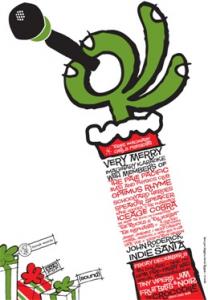 A Gun That Shoots Knives

Three Imaginary Girls, "Seattle's sparkly indie- pop press," will host a Holiday Karaoke Bash on Friday, December 8, 2006 at The Crocodile, to welcome in the holiday season with their favorite local rockstars singing karaoke. The night will kick-off with a Sub Pop and Barsuk Records-supported pre-party with acoustic sets from members of Sub Pop artists Fruit Bats and Tiny Vipers, and a very special performance from Barsuk Records' Jim Noir.

The night will feature rockstar performances by local musicians and celebrities. Members of Math & Physics Club, Iceage Cobra, Head Like a Kite, Schoolyard Heroes, Speaker Speaker, Kane Hodder, Optimus Rhyme, the Pale Pacific, the Elephants, We Wrote the Book on Connectors, The Trucks, A Gun That Shoots Knives, Central Services, The Pharmacy, Tullycraft, Night Canopy, Dita Vox, Shorthand for Epic, several KEXP DJs, and many more special guests are prepared to take the stage to croon for our mutual holiday enjoyment.

Of course — in imaginary style — you won't need mistletoe to get lucky. The event will feature the amazing John Roderick of the Long Winters as Indie Rock Santa Claus, to ensure you get your holiday wish-list heard by Mr. North Pole himself.

"How often does one get the chance to have her picture taken while sitting on John Roderick's lap?" asked imaginary girl Liz. "That's reason enough to attend!"

"This is the best holiday gift ever – a pre-party with Sub Pop and Barsuk, followed by an off-the-hook karaoke bash!" said imaginary girl Dana. "It's a Christmas miracle!"

Steve the Karaoke King (of Twilight Exit, Molly McGuires, and the Comet Tavern) will serve as KJ for the big event, which means the song selection and the sound system will both be incredible. Need further incentive? Imaginary karaoke parties always tend to attract surprise guests (including Vendetta Red's Zach Davidson and the Posies' Jon Auer at past events), and the girls will have girls will have raffle prizes galore from favorite folks like Merge Records, K Records, and Pattern 25 Records to bulk up your end-of-year CD collection. Event supporters Sub Pop, Barsuk, and Seattle Sound magazine will also be providing extra- exciting gift packs for lucky audience members to win.

Three Imaginary Girls are no strangers to the Seattle rock scene. During the past four years, the girls have reviewed hundreds of live shows and CDs in Seattle and beyond. They also book local music showcases, and have hosted various rockstar karaoke events, such as their Labor Day Buttrock Karaoke Party, their Silly Love Songs Friday the 13th Pre-Valentine's Day Bash, and a "69 Love Songs" Pre- Valentine's Day Tribute night.