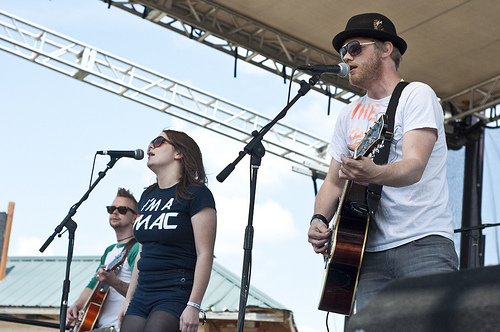 Really, so much good stuff to see today at Sasquatch! On the Uranus stage at 3:00 are Seattle rockers  The Young Evils. What started a few years ago as a more acoustic based Vaselines homage between Troy Nelson and his girlfriend (now wife) Mackenzie has expanded in both members and sound. They’ve amp’d up the volume and expanded to 5 members. This band is all about having fun, and what better way to start off a Saturday afternoon.

Fans of soul and funk will want to check out The Budos Band, playing on the Main stage at 3:10. Anyone familiar with the bands that come from Daptone Records (Sharon Jones and the Dap Kings, The Sugarman 3, Charles Bradley) knows that they’re making some of the best modern day soul and funk sounds today and have been for years. The 7-piece band makes instrumental jams played by top-notch musicians.

At 6:20 in the El Chupacabra dance tent is Vox Mod, the local electronic project of Scot Porter. Vox Mod makes some pretty enjoyable beats, and he has recently collaborated with rapper Ra Scion of Common Market. At Sasquatch he’ll be joined onstage by VJ Ben Van Citters.

Following Vox Mod it the El Chupacabra tent at 7:25 is Perfume Genius, who I was lucky enough to see open for Belle and Sebastian last month.

Headlining Saturday night are longtime Seattle favorites Modest Mouse, who have recently released their sixth studio album Strangers to Ourselves. Much like Sleater-Kinney, Modest Mouse is bound to have a lot of fans their 90’s heyday as some youngsters from the newer generation. With so much great material to choose from, it will be fun to see how they fill their 1 ½ hour time slot.

Closing out the El Chupacabra dance tent are Seattle EDM duo Odesza. The pair has had a meteoric rise over the past few years; selling out back-to-back nights at the Showbox as the duo did last fall is no easy feat. Their sophomore release from last year In Return ended up on a lot of people’s best of 2014 list, and rightfully so; the melodies are catchy, the hooks are downright infectious.