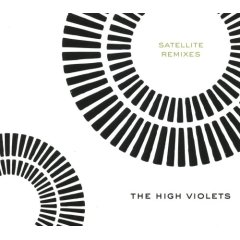 Remix albums are tricky. Likely to catch the attention of devoted fans well acquainted with the music, or remix enthusiasts, it seems daunting to put out an album that may not hit a new swarm of listeners. What is the measure of success? Do songs that people have heard before sound new and fresh? Listening to The High Violets' Satellite Remixes is like hearing the songs for the first time. Listeners will have to decide if they like the new sound or feel it is not always evocative of the band's actual music.

The key element sending this album into the stratosphere is lead singer Kaitlyn Ni Donovan's voice. When juxtaposed with the band's usual guitar driven songs, Ni Donovan's voice is reminiscent of The Sundays' Harriet Wheeler. Layer the beautiful ethereal voice over electronic beats on Satellite Remixes and Goldfrapp, Cocteau Twins, and Clan of Xymox are the more immediate references.

The music was the creation of a global slew of DJs and producers from Seattle, San Francisco, Los Angeles, Mexico City, and Europe. Pulling out one gem is impossible; each remix is a complement to its neighbor. The lush nature of the beats lends to listening while having a dinner party or some activity where the music can be a floating happy background, or better yet, through headphones while lying still in the dark. Hear "Chinese Letter," "Sun Baby" and "44 Down" as if you've never heard them before.

Satellite Remixes is definitely worth a listen. Whether it attracts a new fan base to the band remains to be seen.