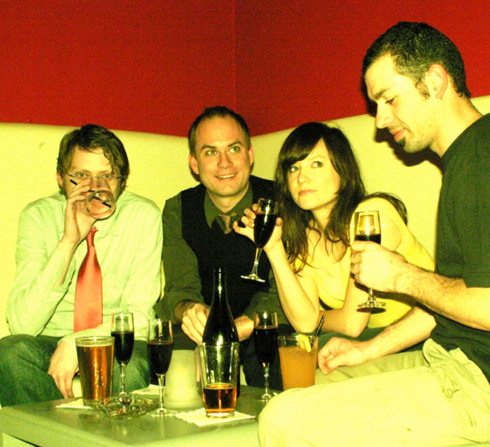 We are all kinds of nostalgic here at imaginary headquarters as we mark our 10th anniversary and look back on all the amazing bands that have held firm spots in our hearts (and on mix tapes) over the last 10 years.

One band that supplied many nights of fun in our early days (specifically between 2001-2006) is Love Hotel.  Their song, "Ahoy Supercool" was played on a repeat loop for some time and their shows were always a lot of fun.  How could they not be? Love Hotel is made up of four of Seattle's finest who have also flexed their muscles as members of Harvey Danger, The Typing Explosion, Voyager One, and Severna Park.  Members Sarah Paul Ocampo, Aaron Huffman, Mark Dibeh, and Bo Gilliland are so comfortable on stage, playing their sexy-smart pop songs that blend Rilo Kiley with early Liz Phair {and you can listen and download Love Hotel on bandcamp for free!}.

(side note: Can we start a petition to bring Typing Explosion back?!?!?)

And we feel like the luckiest imaginaries in the world, because Love Hotel have decided to get back together, for just one night, at Barboza this Saturday, June 23, 2012!  Also on the bill is a set of equally illustrious openers: Sean Nelson & Shenandoah Davis, and Tomo Nakayama (Grand Hallway).

More than just a night of looking back, this show will remind us all why the Seattle music community is second to none, as a room filled with friendly folks gets to be a part of the fun as buddies take the stage to share their superb pop songs in a cozy room.  Also reminding us, it doesn't have to be a big show to be grand and special nights like this should not be missed.