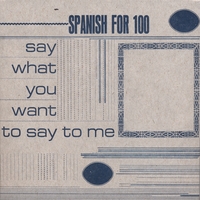 Say What You Want to Say to Me

There is something about Spanish for 100, be it the band by this name or the curriculum of my freshman year in college, that gets me all warm and tingly. The latter is probably because of the saucy senorita of a teacher who taught me how to roll my Rs, but it’s harder to place the source of this feeling when dealing with the Seattle-group Spanish for 100.

Say What You Want to Say to Me isn’t exactly groundbreaking work, but its straightforwardedness and simplicity keeps it enjoyable. It could also be that overdriven guitars just sound better when the weather is nice.

Spanish for 100’s sound is definitely a Megazord comprised of very distinct influences. Slow slinking guitars that explode into sonic chaos are reminiscent of Built to Spill, while guitarist/vocalist Corey Passons’ somewhat teetering voice sounds like an updated version of Tom Verlaine.

From the disc’s opener “Attack!,” the albums most popular song (I’ve heard it on KEXP – that makes it popular, right?), SF100 set the stage for the rest of the album. Passons’ voice is the perfect accompaniment to the punchy guitars that light up this album. A perfect example is “Limerance Be,” a song that drips back and forth between thundering nightmarish verses and lofty dreamlike choruses. “Sangria” is full of Muse-like (the band not the entity) vocal theatrics that aren’t ever overdone, while tracks such as “See Now” slow the flow down, albeit temporary, before the suspense-riddled “Red” ambushes the listener and pushes them back into a I’m-gonna-punch-the-air mood. The lyrics on Say What You Want to Say to Me are thoughtful and well-delivered, but the musicianship of this album keeps them for becoming saccharine and melodramatic.

Spanish for 100 are a testament the diversity of Seattle’s music scene. They’re a band that can shoe gaze with the best of them, but they are also quite capable of kicking the amps up to 11 and giving the kids what they really want.