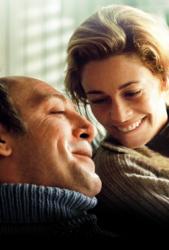 "How do you think I felt when I had to quit the sea?"

I'll begin with a disclaimer. The Wonderfalls full-series DVD was released this week, and I'm just a teeny bit obsessed. If you read mention of Jaye Tyler or a talking wax lion or the High & Dry Trailer Park anywhere below, it's because my various worlds have errantly merged as a result of compulsively viewing that too-good-for-Fox show.

I'll just put in an extra picture of sexy Spaniard (and Oscar® nominee) Javier Bardem a little bit further down the page to make this article seem longer, how 'bout? In the film I'm supposed to be reviewing here, The Sea Inside, he plays quadriplegic Ramón Sampedro, a fascinating true-life figure who fought a 30-year campaign to win the right to end his life with dignity. The story is essentially told through Ramón's relationships with two women: Julia (fantastic Belén Rueda) a lawyer who supports his cause, and Rosa (Lola Dueñas), a local woman who wants to convince him that life is worth living. From the press notes: "Despite his wish to die, Ramón taught everyone he encountered the meaning, value and preciousness of life."

OK, maybe. But the film isn't nearly as pat or cheesy as that might imply. Under the direction of Alejandro Amenábar (The Others, Open Your Eyes), Sampedro's story never feels sensationalized or preachy. And touches of sheer, soaring loveliness — one particular flight-fantasy sequence surges with pure emotional beauty — remove it far from the realm of TV-movie territory.

Ever-Wonderfalls… I mean ever-wonderful Bardem keeps this potential downer of a film vibrant and essential. {If you haven't seen him in Before Night Falls, you simply must. And I don't care what the tabloids say, I'd go dancing with him anytime.}

The Sea Inside recently swept the Goya awards in Spain. Stateside it received Academy Award® nominations for Best Foreign Language Film and Best Achievement in Makeup, and it's also listed as a runner-up in my recent best films of 2004 feature.

OK, you'll never believe what's happening now. The wax lion is singing "One Hundred Bottles of Beer on the Wall" in Jaye's trailer and… d'oh!