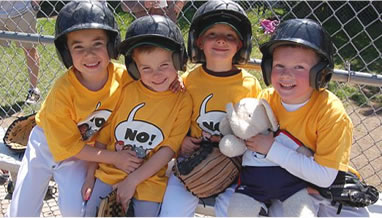 Seattle's newest little league team: They Might Be Giants

Chalk this up to the cutest thing I've seen in a while: They Might Be Giants (the band) are sponsoring little league teams around the country — with one of the lucky (in names and sponsorship) beneficiaries being a Seattle pack of sweet-ums. This idea is even cuter than that wee batter with the stuffed elephant on his lap!

As baseball season starts up, Little League teams are forming all cross the United States. In Seattle, the newest team in the league is THEY MIGHT BE GIANTS. When two coaches named John (just like those two guys in They Might Be Giants) thought what better name then They Might Be Giants for their T-Ball team of 5 to 6 years olds. As the team They Might Be Giants does not keep score at their games, we like to say they currently undefeated!

And now, back in Brooklyn, alternative rockers They Might Be Giants have caught the baseball spirit and are offering to [2]sponsor other teams. They Might Be Giants, recent recipients of the 2009 GRAMMY for Best Children's album for "Here Come the 123s," were delighted to hear the about the new TMBG team. Guitarist John Flansburgh: "It's very flattering, and the photograph just knocked us out. Seeing an entire Little League team all wearing the "No!" t-shirts just made everyone in the band smile."

The band was so enthusiastic that they are now offering teams free "No!" shirts in support of getting kids involed in America's favorite pastime. Flansburgh explains: "If a pizza parlor or a super market can sponsor a team, why can't a rock band? We've posted a free shirt offer on our web site, and as new teams form we're going to post their group photo alongside the Seattle team. We only have t-shirts to offer right now, but if we can get hats too, we're up for that."