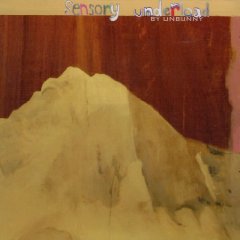 Diana Salier April 1, 2009 no Comments
There's no simpler way to sum up this collection of tracks culled from singer/songwriter Jarid del Deo's (codename: Unbunny) 13-year recording career than to look at the album's subtitle: Uncertain Tracks. The protagonist in del Deo's songs always seems to be the short guy in the back of the high school dance who never conjured the guts to talk to the pretty girl, or Rivers Cuomo's Dungeons & Dragons/X-Men-loving guitar geek sitting in his garage playing songs to Ace Frehley. Channeling equal parts early 90s Built To Spill, Grandaddy, and Elliott Smith, Sensory Underload is an oft-acoustic, sometimes fuzzed out, but always lo-fi experience that takes you deep into the world of indie nerddom.
In del Deo's world, it's commonplace for dental hygienists and Kinko's workers to find love at the grocery store after work ("Dental Hygienist"), or for you to enter a sickness-induced delirium and imagine yourself the ruler of household items and furniture while waiting for your girlfriend to bring you medicine ("Queen of Nothing"). And, of course, there will always be the age-old shy guy's lament: "I really want to talk to you/but I get a little tongue-tied/everybody gets tongue-tied sometimes/but I think you doubleknotted me this time" ("untitled").
After listening to the album on repeat, I quickly found a favorite in "Every Saturday," one of the more fully arranged tracks on the album buoyed mostly by a strummed acoustic guitar and heavy analog synthesizer, which give way at the end to a guitar jam straight out of There's Nothing Wrong With Love.
Because Sensory Underload is a compilation of songs from multiple EPs, you never know what'll come up next. It travels from folky, Elliott Smith-type acoustic ditties to the aural equivalent of a haiku, painting an image or feeling in under 2 minutes. Sometimes the songs come way out of left field, like with "We're All Gonna Die," a 35-second morbidly cheerful tune that sounds like The Count from Sesame Street had a guest vocal part (take a listen and you'll see what I mean).
The geeks may not have inherited the earth just yet — but they've certainly made a home in indie rock.