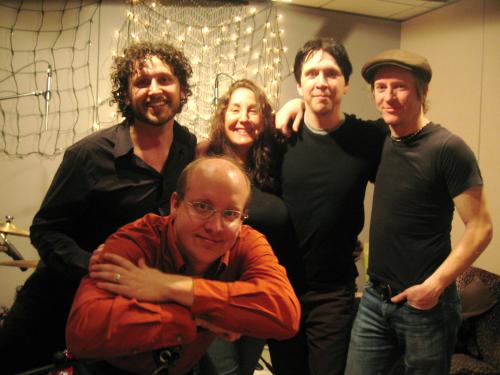 What a great break from the {imaginary grind}: today at noon I visited the amazing KEXP studios to watch local powerpop band Shake Some Action! play a live in-studio with DJ Cheryl Waters. With their jangly guitar work and cheerful harmonies, the band charmed Cheryl and me and I'm guessing loads of peeps in the listening audience with four songs from their debut self-titled record {review}: "Sound of Your Mind," "Without You," "Damaged," and "Someone Else's Friend." If you're not familiar with the band, think slightly-dark, melodic powerpop in the vein of the La's or Hoodoo Gurus meeting the song-writing prowess of Bob Mould or even early REM.

Cheryl then went on to play the song "Shake Some Action" from the Flamin' Groovies shortly after the set (yes, that's where the name comes from). She's all class, that Cheryl. And here's a photo of her with the band, right after the set (and full disclosure: oh yea, that's my fella standing to her left…).

I personally can't wait to catch the Heavy Hearts; I've been digging on the lo-fi power-punk energy of their latest EP and I betcha their going to make Old Ballard Avenue blister!