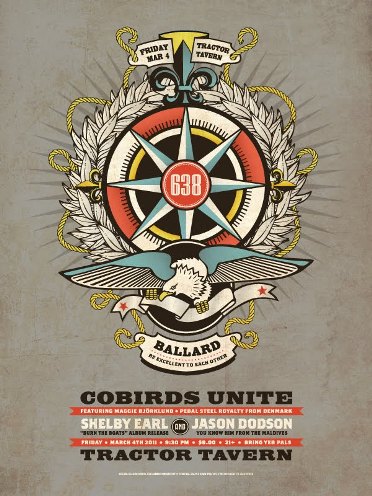 Shelby Earl has a saucy, simmering new CD! Come to the release this Friday, March 4 at the Tractor Tavern

Shelby Earl has a delightful new album titled Burn The Boats. Produced by John Roderick, it features a musician’s musician’s party full of guest stars, supporting players, and exotic extras, who help make the eleven-track after-hours roadhouse opera a sweet whisper in your ears throughout. Opening tracks “22 (You’ve Got Me Undone)” and “Legend of Persephone” put Earl at Neko Case / Rachel Flotard level, and the rest of Burn The Boats continues to glow and flicker upon the waves of your, um, listening device.

Speaking of Flotard, this Friday, March 4, 2011, at 9 PM, she’ll be playing the same night that Earl will be veil-dancing her new songs, peeling them off for fans at the Tractor among the many others who contributed to the new full length. To quote Shelby herself:

“We will be celebrating the last show for the amazing Rusty Willoughby and Rachel Flotard of Cobirds Unite before they head off to Austin for SXSW. They will also be joined by Bloodshot Rec’s Maggie Bjorklund on pedal steel! And another night of general awesomeness for Ballard’s own Jason Dodson (of the Maldives) and friends.”

I have the feeling tickets for this event are going to sell like wooden matches to campers, so here’s a shortcut to getting yours timely-like.