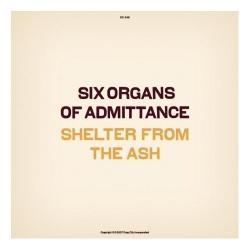 Shelter from the Ash

Sometimes, during the course of my music reviewing routine, I’m presented with an album that I feel I really don’t know how to handle. It is not that the album is bad or uninteresting, but rather it is so outside the normal envelope of my daily listening that I feel like I have no anchor on which to latch my perceptions. Six Organs of Admittance are just such an experience. The music is fascinating, compelling and nothing like most of my music collection… so I’m left with dealing with music that exists independent of most of my understanding.

Shelter from the Ash, the newest album from northern California’s Six Organ of Admittance, is as close as you might get to listening to a dusty trail, remote from any city, raw and rustic. The album itself is dominated by Ben Chasny’s remarkable guitar-work, delicate and intricate, bordering on a work of classical guitar. Just the opening of “Alone with the Alone” puts Six Organs of Admittance alone in a world of musical proficiency, creating more of a symphony of rock rather than a mere song.

Some of the tracks are more conventional, like “Strangled Road,” which is a melding of the distant Palace sound with Calexico. It is both menacing and warm at the same time. “Jade Like Wine” is a soft, drifting song that wraps around you like a warm breeze in the desert, like a bastardized folk song. The title track is deep and hollow, with more electric guitar and more rock structure while the closing number, “Goodnight” is a quiet lullaby for parents who want to fill their children with a sense of the infinite. However, much of the album is populated by more experimental pieces like “Goddess Atonement” or “Coming to Get You” that wax and wane as the band creates an entire universe around the instrumental tracks. The songs seem to speak to a yearning without ever saying the words, like “Final Wing,” a song so tense that it can be difficult to listen to comfortably.

Even in writing this, I feel like I can’t do Shelter from the Ash justice. It works on levels that are so far divorced from “pop songs” that you really need an entirely new standpoint and lexicon to describe what these pieces are. What I can tell, though, is these songs are deeply passionate from their creators, whisking in the tones and mystery of sound into a fevered dream, making for a listening experience different than any other I’ve had this year.