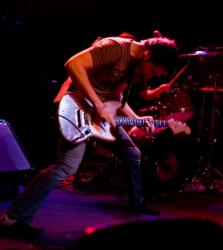 The Velvet Teen at the Croc

One thing I’ve always admired when I listened to the Velvet Teen was that even though they have only recorded three records and a small handful of EPs (which I guess is about right for a band of its longevity), they have yet to make the same record twice. And when they played for roughly 35 minutes at the Crocodile last Thursday night, they played several of their songs considerably different from how they first appeared on in recorded form.

Of course, one reason for this shift in strategies for the record is that the lineup has been changing constantly. Only original member/singer Judah Nagler has remained in the band since its genesis in 2001. Original drummer Logan Whitehurst left the band after Elysium to focus on his own project and sadly lost his battle to brain cancer a year ago. He was replaced by Casey Dietz, who is a much more bombastic presence behind the drum kit. Guitarist Matthew Izen was recruited to join the band after original guitarist Josh Staples left after Cum Laude to focus on his own band, The New Trust.

When the band played at the Crocodile last Thursday, their short set (they were opening for Say Hi To Your Mom) contained songs scattered throughout their three albums, with the bulk coming from the most recent, Cum Laude. They experimented with tempo changes and different instruments throughout the set. At one point late in the set, a friend of mine identified the song “Caspian Can Wait," whose lyrics sounded familiar, yet the song was reworked with an increased tempo (if my memory serves me correctly) and was difficult to immediately identify. I still appreciated that they were still able to pull off the lush harmonies from Nagler even through a wall of guitar chords and reverb. Sometimes Dietz’s drumming made it difficult to hear Nadler’s lyrics. I gave up early in the set trying to piece together a set list and instead chose to let the Velvet Teenagers rock me however they saw fit.

The all-ages crowd at the Crocodile packed in to see the Velvet Teen and were engrossed throughout their too-brief set. I went home after the played, giving way to my alarm clock and day job rather than the charms of Say Hi To Your Mom.