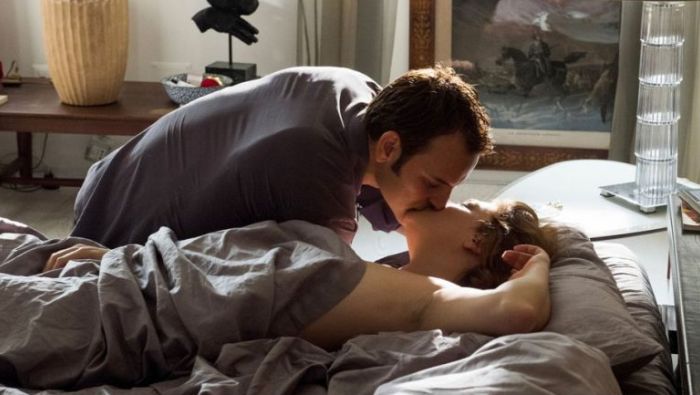 A buzzy comedy debut by Boots Riley, a tidy British melodrama starring m’lady Emma Thompson, and an irresistibly glorious Italian murder-mystery are among the must-sees of SIFF 2018’s final week and closing weekend (6/1 – 6/10).

The Children Act
{6/3 12p Uptown}
Emma Thompson’s beautifully restrained performance elevates this (mostly) intriguing BBC Films production, written by Ian McEwan and based on his novel. M’lady Emma plays a very focused family-court judge who lives in maybe the best flat in all of London. Soon after her husband (Stanley Tucci) announces his intention to have an affair, Emma must rule in the case of a different male child: an actual teenager who is refusing a life-saving blood transfusion on wackadoo religious grounds. What should be a cut-and-dry case becomes quite messy indeed, in what otherwise is perhaps the tidiest melodrama ever. So very British. I had a great time.

The Greenaway Alphabet
{North American premiere. 6/1 8:30p SIFF Film Center}
Multimedia artist Saskia Boddeke spent several years filming conversations between her husband, the artist and filmmaker Peter Greenaway, and their teenage daughter, Pip. The result is a documentary that chronicles and resembles Greenaway and his work: encyclopedic yet structure-defiant, charming while exasperating, visually anarchic but pleasingly vibrant, playful and a little bit naughty. The interactions between father and child are unaccountably moving – his face is never brighter than when Pip enters a room – and the creative incorporation of movie clips made me want to settle in somewhere and re-watch Peter Greenaway films for an entire weekend. Wonderful.

The Last Suit
{6/3 6p Kirkland}
Sweet gem of a movie about a gruff, cranky 88-year-old tailor named Abraham, played beautifully by Argentine actor Miguel Ángel Solá, who leaves his Buenos Aires home for a one-way trip across Europe to reconnect with the man who saved his life after Auschwitz. The plot partakes in quite a few “scrappy road trip in search of…” sub-genre tropes, but the film’s performances – especially the central one, rough by design, imbued with longing – give the material a tidily-stitched finish.

Naples in Veils
{6/2 6p Kirkland; 6/5 6:30p Egyptian; 6/6 4p Uptown}
If you can help it, never miss a chance to see a Ferzan Ozpetek film on the big screen. His latest reunites the director with luminous lead actress Giovanna Mezzogiorno, a teaming that 14 years ago (!) produced one of my favorite films of the ’00s, Facing Windows. In the gorgeous, glorious Naples in Veils we have a sensual murder-mystery about a medical examiner who, after some whirlwind sexytime with a younger man, next sees him on her autopsy table. And that’s all I’ll say about the plot. The real subject is Naples itself: outrageously beautiful, sometimes fiercely violent, gently caressed by magic, forever teasing its inscrutable secrets.

Sorry to Bother You
{6/2 5:30p Egyptian}
Many days hence I’m still processing Boots Riley’s debut feature, a batshit comedy led by Lakeith Stanfield (Atlanta) as a down-on-his-luck character named Cassius. A new job at a telemarketing company shows Cassius the power of his “white voice” (dubbed very whitely by David Cross), and eventually leads him (and us!) down a rabbit hole that’s quite unexpected indeed. Indescribable, even. A horrifying dystopia that’s only degrees of extremity from the current actual world reveals itself, and its truths never stop knocking the viewer square upside the head. There are many delights (Tessa Thompson as Cassius’s gf is one) but overall this film will very likely bother you. Sorry, not sorry.

Supa Modo
{6/1 4:30p Shoreline}
Very special little movie that’s sweet and bitter in satisfying proportions. The story follows Jo, a nine-year-old Kenyan girl who is very into superheroes, soon after she receives a terminal diagnosis. Unable to force Jo to spend her remaining days in bed, her community comes together to support her belief in her own special abilities. By the end of its short runtime, Supa Modo becomes a loving recognition of the power of cinema – and although the heroes aren’t Marvel-flashy, and the setting is far from Wakanda, there’s a post-credits scene. Stick around.

Virus Tropical
{6/2 8:30p Shoreline; 6/7 4:30p Uptown}
This very charming SXSW Audience Award winner, based on the autobiographical graphic novel by Colombian-Ecuadorian cartoonist Power Paola, follows the author from conception to young adulthood as she stumbles through a frequently-unraveling home life, friendships brief and lasting, and awkward romantic dalliances. Yeah, most of the expected coming-of-age elements, but presented in unexpected ways, thanks in large part to the delightful, often downright stunning hand-drawn black-and-white artwork – I really regret not having seen the film on a bigger screen. Simple directness serves the scattered narrative well. I want a sequel pronto.

Waru
{6/1 6:15p SIFF Film Center}
Eight female Maori directors provide eight single-shot vignettes, all taking place within the same ten-minute period of one fateful day, in the looming shadow of a young boy’s death. As with most anthologies, the individual pieces vary in quality and captivation, but when the stories really work they’re as powerful and raw and fierce as the women who populate them.

Gold Seekers
{6/3 8p Uptown}
Often quite fun, but ultimately just shy of satisfying, this buried-treasure flick from Paraguay is referred to in SIFF’s program notes as “National Treasure meets The Goonies“. Enjoyment levels will vary accordingly. There are crumbling treasure maps, zippy street chases, nicely-rendered observations of culture and class matters, and a very interesting visual metaphor involving rising waters that repeats appropriately from setting to setting. But the material doesn’t quite reach a depth beyond that of a good-natured and worthwhile diversion that never truly achieves its high-octane heist-thriller potential.

Jinn
{6/6 7p Pacific Place; 6/7 3:30p Uptown}
This SXSW awardee is like a more-sophisticated After School Special. It follows Summer, who is a hip high-school senior, and her weather-anchor mom, who has recently become a Muslim. There’s also a tantalizing young man who is Summer’s schoolmate and who attends the mom’s new mosque. Many of the potential conflicts and plot points you’re imagining play out one way or another. The film doesn’t demonstrate a full grasp of TV news or social media or narrative continuity or meteorology. But does it have to? Nah. It’s not at all unwatchable.

Noble Earth
{6/2 6p Uptown; 6/3 4:15p Pacific Place}
Sluggish even at 79 minutes, this film is often lovely to look at but ultimately not so bellissimo. The story follows a directionless millennial named Emma who begins a romance with a young Italian aristocrat whilst on vacation in Florence. Parties are attended, beaches are lounged upon, and Emma becomes disenchanted, for admittedly legit reasons; whatever sheen she detected begins to fade. This sheen never really exists for the viewer, though. There’s a muted grimness to it all, even in Tuscan sunlight, obscuring potentially interesting observations about degrees of privilege.

Queerama
{6/1 1p Uptown; 6/6 9:30p Uptown}
Short-n-sweet documentary in which a century of LGBTQ representation in UK pop culture is illustrated through a supermix of vintage film and TV footage. Filmmaker Daisy Asquith gained unprecedented access to the British Film Institute archive to produce a mélange that’s at turns shocking, intoxicating, and very funny. The footage has such power and poignancy that the overbearing, on-the-nose nature of some of the soundtrack’s songs – the John Grant stuff in particular, and gawd there’s a lot of it – threatens to diminish the overall effect. But a sexytime montage set to Goldfrapp’s “Ooh La La” works beautifully.

A Skin So Soft
{6/9 6p SIFF Film Center}
For years I’ve admired the feature work of Quebecois filmmaker Denis Côté (Vic + Flo Saw a Bear, Curling), who lately has been making stylish and observational documentaries, frequently focused on outsiders. Here he follows six bulging bodybuilders during their daily routines in and out of training: being parents, watching professional wrestling, sometimes being wrestlers themselves, choking down unenjoyed food, hanging out with loved ones, and… napping. Quite a bit of napping. Speaking of, this film is not exactly a thrill-a-minute, and it might induce somnolence in some. It induced wonder in me.