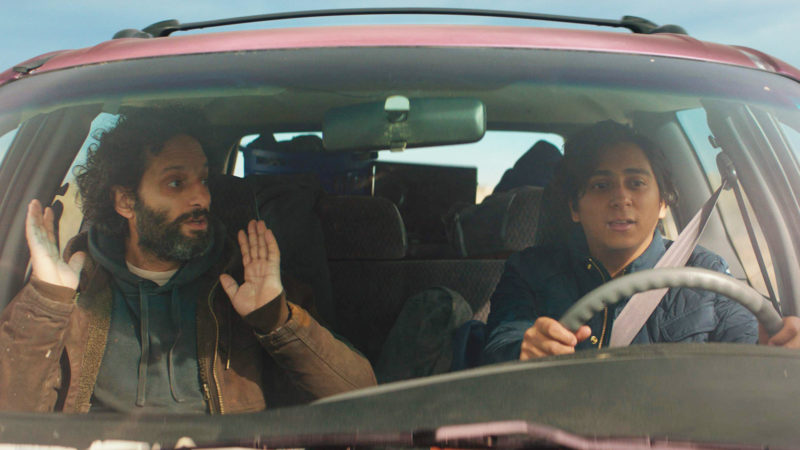 The Long Dumb Road is, mostly, great fun. So let’s start with the great fun, but stay tuned for that “mostly,” because it’s a big one. The movie, directed by Hannah Fidell, is a worthy iteration of the mismatched buddy road-trip comedy with the added bonus of starring two comedic actors—Jason Mantzoukas from The Good Place and Brooklyn 99 and Tony Revolori, best known as the Zero from The Grand Budapest Hotel—working at the top of their game. Mantzoukas plays Richard, a self-professed piece of shit with a philosophy and a generous streak, and Revolori plays Nat, a sheltered soon-to-be art student who takes arch pictures of fast food strip malls with his film camera and shies away from conflict. There’s a freshness to many of their shenanigans despite their general bent towards seediness because Richard seems to genuinely care for Nat, and because Mantzoukas so skillfully walks what is now his signature line between wide-eyed innocence and borderline irredeemable douchebaggery.

So here’s the however. However. The movie crossed a line that we shouldn’t need to discuss any more. Surely, surely we’ve reached a point by now where treating women like garbage when they reject you is no longer an act you get to recover from and then be the hero, or even the anti-hero. Mantzoukas is almost irresistibly likable, so it is painful to watch him work with the material he’s given in 2 scenes where, in each, he makes women into impossible idols of perfection only to behave like an unhinged jerk when they don’t reciprocate his insane monomania. Let Richard be almost intolerable. Let him make terrible, terrible decisions, and drag Nat into them. Let him do dumb, even cruel things, and then let Mantzoukas work his way out of that jam. But let’s treat rampant misogyny as a fatal flaw that must be addressed directly, not as a personality oopsie that can be dismissed with enough charming nonsense of another stripe, can we agree on that? Let’s put that one out to pasture alongside blatant racism, or bald homophobia. No more characters who call women the “c” word if they refuse their patently insane advances, or if they have the temerity to disagree with you, or if they are happily married to someone else, only to have that behavior regarded as the quirk of an eccentric who maybe just sort of needs to grow up or whatever. If he does these things and then later grows in some way, sure, fine, give him that arc. But if it’s just one in a string of antisocial behaviors, treated as the equivalent of a fun bar fight, or having terrible taste in friends? Pass. Let’s ask no more charming actors to paper over that kind of behavior. Let’s find other ways to make them require redemption and then attain it.