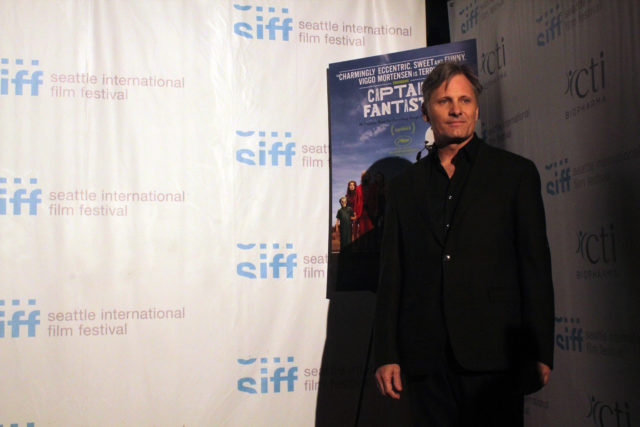 TIG got to hang out on the red carpet again last night for the Viggo Mortensen Tribute program, which included Viggo receiving SIFF’S Outstanding Achievement in Acting Award and a screening of Captain Fantastic (the winner of the Golden Space Needle Award for Best Film this year!). Two awards! Count them, two!

After SIFF Festival Director and Chief Curator Carl Spence presented Viggo with his award, Entertainment Journalist Dave Karger joined Viggo on stage for an interview. Mortensen is genuine, soft-spoken and as amazing at story-telling as he is at his craft. Tale after tale was revealed, including an admission about his fear of heights, the fact that he’s seen every Peter Jackson Lord of the Rings and Hobbit film in the theater (from the front row), and how he threw his back out the night before that famous nude fight scene in Eastern Promises, but was able to make it through with some help from whiskey and aspirin.

After a short intermission, the delightful Captain Fantastic was screened — and afterwards Director and Writer Matt Ross joined Viggo on stage along with Carl for a Q&A about the film. Ross was charming and candid and just so fucking great to listen to.

But before all that happened, Imaginary Liz manned the camera while Imaginary Amie asked Viggo and Matt Ross (who is also an excellent actor) some questions.

TIG: Because this night is in tribute to you, I wanted to ask you a few questions about the films SIFF is showing this year. Re: Captain Fantastic, if you could choose to live off the grid, where would you live and why?

Viggo Mortensen: Well I used to live in this region; Northern Idaho in the panhandle. I like it there; I like the woods there. I do like this kind of climate; this natural landscape you find out here. So, here wouldn’t be a bad choice.

TIG: Makes sense to me! Re: A Walk on the Moon: If you could see any band at Woodstock, who would want to see?

TIG: Definitely Janis Joplin! Re: Lord of the Rings: If you could play any other race in those movies, what would it be? Elf, dwarf, hobbit?!?

VM: Um … I have no idea! {chuckling} I guess … since my character has a bit of elf in me, I’d choose elf. Does that make sense?

TIG: That definitely makes sense. One last question; what’s next for you?

VM: I don’t have an acting job at this point, but I’ve been writing and I’m trying to put together something I’d like to direct. So hopefully that, but I know it’s difficult. Even if you have a great script, it’s hard to get the financing and stuff together to get it made.

TIG: Well, I wish you luck!

TIG: Did you listen to a particular kind of music when you were writing this story?

Matt Ross: When I write, I listen to Sigur Rós — almost always. Somtimes Tom Waits … but for this particular one it was a lot of Sigur Rós.

TIG: Excellent choice! So if you, personally, were going to live off the grid, where would you go and why?

MR: Either Washington or Oregon — I grew up in Oregon, although I think British Columbia is pretty beautiful too … but I’m not as familiar with it, so I’d probably get lost.

TIG: So in the film, they celebrate Noam Chomsky Day. What other literary figure would you create a holiday around? {note: this question was conceived by Imaginary Embracy!}

TIG: How would you celebrate Shakespeare Day?

MR: Oh man. I have no idea! I think we should probably all dress like Hamlet in shades of black, like I am now. Dress all of our children in black too, and then bemoan our fate … and then eat cake! Chocolate cake with chocolate frosting.

TIG: What led you to write the story of Captain Fantastic?

MR: The genesis of it was being a dad. I have two kids, and I was thinking a great deal about being a father and what my values are. When you have children you begin to curate someone else’s life. And I started thinking a lot about it, you know? What am I feeding them, and why? What are they reading, and why? Video games and television and all these things … I had a lot of questions about being a parent, and I put it into a dramatic narrative where I could ask those questions.

TIG: Yeah, that’s awesome. What’s next for you?

So, in short: Saturday June 11 was the BEST DAY EVER — and SIFF ruled so, so, SO hard this year. I enjoyed every single film I watched, loved every single bit of the Q&As and Tribute, and had the most fun interviewing people. I’m kind of bummed it’s all over (as of tonight).