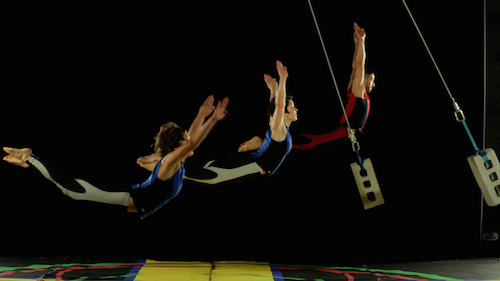 If Evel Knievel had been into dance, a bit LESS risk averse, and had a borderline cult-like following then Born to Fly would be about him. Instead, it’s about Elizabeth Streb, the founder of “pop action” dance: a mash-up of stunt work, acrobatics, dance, and general disregard for the laws of physics and good sense. Oh, sometimes with giant mechanical apparatuses thrown in for good measure.

The dance is truly something to behold onscreen as company members throw themselves at walls, dodge rotating I-beams, and generally make dance look more suicidal (or at least more masochistic) than I’m used to seeing. The picture alternates between Streb’s history, performances, and interviews with her dancers. It’s hard not to note the bordering on deity worship that has the young men and women literally risking life and limb to aspire to Streb’s punishing esthetic ideals while barely making ends meet. But then again, they seem to be having a hell of a lot of fun with their extreme take on motion arts. I just wouldn’t want to foot the bill for their post career medical coverage.

It’s hard to believe I’m enthusiastically recommending a dance documentary outside the Step-Up* series – yet here I am. This is an interesting documentary both somewhat about why people do irrational things and the wow of watching them. I hope people will notice it amongst the multitude of other options during the festival this year.

* No – I’m not interested in being told those aren’t documentaries. They just seem so reasonable and realistic all the way through.