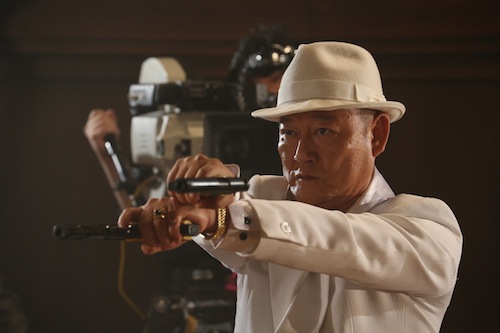 SIFF Take: Why Don’t You Play in Hell

Equal parts Yakuza drama, slavish love story to classic cinema shot on film, romantic comedy and over the top bloodbath, the Venn diagram intersection of those genres makes it feel as if Why Don’t You Play in Hell was specifically created for midnight film audiences. The wacky gonzo feel was incredibly appealing especially once I decided that logical consistency had no place in evaluating the film.

It’s hard to comprehensively explain the tangled plot and motivations of all the characters. Thankfully I don’t especially want to say anything that would take away from deconstructing the tangled bits yourself. There are three groups interacting over the course of a ten year period. A group of gonzo (and supremely un-talented) filmmakers also known as the “Fuck Bombers,” two gangs of feuding Yakuza – one of whom dress only in kimono, and finally a budding potential romance between the former child actress daughter of a Yakuza boss and a random guy she meets on the street while trying to run away. Ultimately all these groups are pulled violently together to make a film. Yep … that’s seriously the plot.

Mixed in there’s plenty of references to specific films and cinema in general. What’s not to like?

Why Don’t You Play in Hell is an ultraviolet genre film that likely will appeal to the sort of folks who like to see films about film – assuming they can look past all the blood. And I’m talking little child sliding across a floor covered in the stuff two inches deep levels of blood. I know for many readers I had you at two inches of blood. But even if it doesn’t sound awesome I’d suggest a broader group give it a chance – you might surprise yourself.

{Why Don’t You Play in Hell? screens at the 40th Seattle International Film Festival on 5/24 at the Egyptian Theater and again 5/26 at Lincoln Square Cinemas}