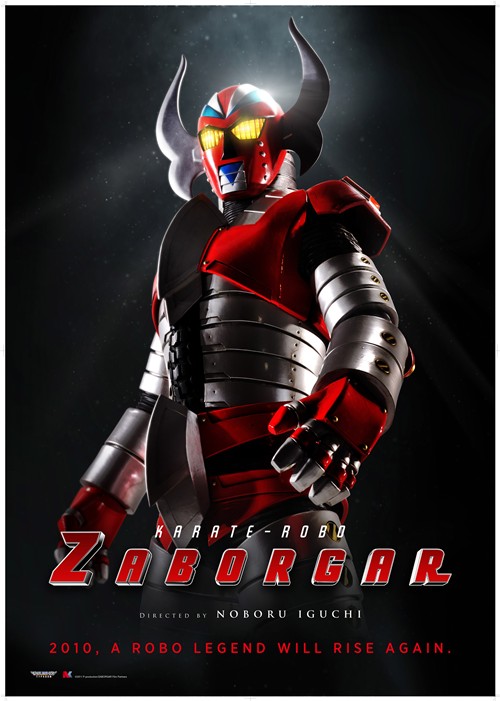 In the case of the latest film from the director of Mutant Girls Squad and RoboGeisha, the description from the SIFF guide is quite accurate:

Police officer Yutaka Daimon and his motorcycle-transforming karate robot partner Zaborgar fight the evil super-crime organization Sigma. But when Daimon meets Miss Borg, a sexy cybernetic agent, their love affair threatens not only his partnership with Zaborgar, but the entire free world as well.

I haven’t seen any of his earlier films so I can’t really compare this to those. This one did feature the cheesy visuals and ridiculousness I expected having seen the trailer from RoboGeisha last year – but what surprised me at times was the over-the-top soap opera melodrama at work. While I laughed at some of the characters (I’m looking at you Diarrhea Robot) and got into some of the action, I also felt suitably outraged at the gender discrimination face by Miss Borg.

Notwithstanding her ability to fight with her head and body separated, the other evil henchmen just wouldn’t respect her. Could be based on out-of-date gender stereotypes in Japan, or maybe the rocket-firing breasts, but I’m just guessing. There’s a lot of stuff going on under the hood here.  Don’t even get me started about how the time-out scene between Miss Borg and Yutaka was an homage to Clooney and Jennifer Lopez in Out of Sight…

All the while, there truly is a motorcycle that transforms into a karate-fighting robot in a way that will remind you far more of a childhood toy than any big budget Transformers film.  There’s just no way to really describe every aspect of the zany going on here without producing a review the length of the film.

Turns out this is more directly a tribute to Transformers than I initially realized. From what I’ve read, it’s based on a 1970’s TV show called Denjin Zaborger. Whose crazy description on wikipedia has a significant number of simularities between the film and show’s plots – though I’m guessing the romance is new.

Overall, it was pretty silly fun. Though I have the sneaking suspicion I hadn’t achieved the proper blood alcohol level to really appreciate it during my screening. Check out the trailer below and if it looks appealing, it probably will be fun for you. There’s a midnight screening of the film, and for the best experience I’d recommend that one as the crowd’s enthusiasm can only help.

Read more about Imaginary Rich’s SIFF-goings and recs over on his blog of cinematic goodness: A Random Walk Through Film.