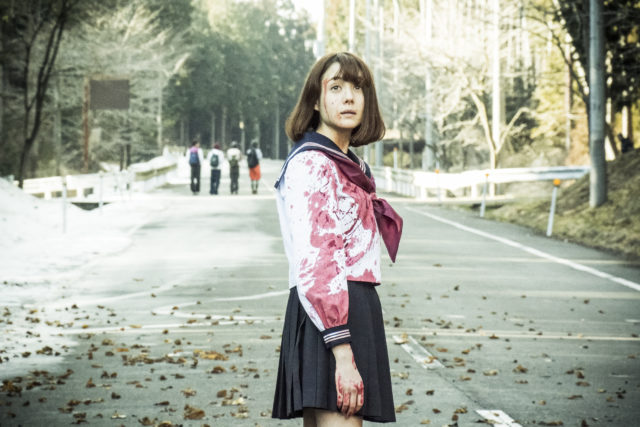 I’m not even sure how to process the fever dream of a movie that is Tag, but I’ll give it a try. The whole thing starts by introducing us to a busload of schoolgirls who (of course) spend their time teasing each other and starting pillow fights, and quickly turns into a major bloodbath. Mitsuko, the lone survivor, wanders for awhile before ending up at her school and finding everyone who just died is alive and walking the halls! Wait, what?

Her best friend Aki does her best to soothe Mitsuko, and the two girls decide to skip morning classes along with a few other classmates — one of whom explains the concept of alternate universes while being chomped on by (or maybe not?) the most puppet-y alligator I’ve ever seen. Upon returning to school, Mitsuko & Aki fall into a death-spiral of murderous scenarios and alter-egos, shifting through time and space but always recognizing each other … even when their faces are different.

I guess you could call it a blood-soaked love story? There are a lot of unnecessary running in short skirts scenes, and even more unnecessary underwear shots, but the gore is really f’ing glorious, and I found myself unreasonably pleased at the thought of one character snapping the necks of bridesmaid after bridesmaid.

In the end, even as I was asking myself, “WTF just happened?” I had to admit that I was rooting for Mitsuko and Aki all along. That + fountains and fountains AND fountains of blood is really what makes Tag worth seeing.