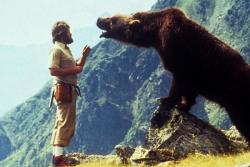 The 35th annual Seattle International Film Festival is unraveling itself starting TODAY (Thursday, May 21) and TIG’s team of ChrisB, imaginary embracey, Roxie Rider and Amie Simon will be providing in-depth coverage from opening night until the final Golden Space Needle Award is given out.

This year’s festival has many highlights, including appearances by legendary filmmakers Spike Lee and Francis Ford Coppola. Locally, the Northwest Connections program is especially strong, cemented by Lynn Shelton’s high-anticipated film Humpday and The Immaculate Conception of Little Dizzle, which features music from one of our favorite bands, “Awesome.” The Face the Music series has mas many excellent features fims but is highlighted by the Sub Pop noise-punk band No Age providing the soundtrack to the 1989 French film The Bear.

SIFF runs through June 14 and we hope to see you out in the theaters.

Update: now that the final Golden Space Needle Award was handed out, the closing film (OSS 117: Lost in Rio) screened and the last drop of Don Q Rum was drunk, TIG’s exhaustive and exhausting coverage of SIFF has wound down. Here is our complete coverage: