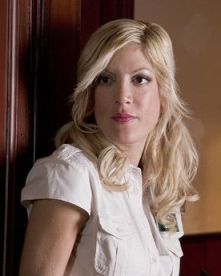 Three days left, and local films are on my mind. While I didn't make it to everything in this year's Spawned in Seattle lineup, the local stuff I did see was a mixed bag… heavier on bad than good.

The best of the bunch, and one of my favorite nonfic pieces of the festival, was Made in China, in which Seattle filmmaker John Helde uncovers his father’s experience growing up an American boy in pre-WWII China. It's beautifully researched and assembled, and it achieves what many personal family indie docs don't: universal emotion.

I warned you about the clueless, just-OK comedy Outsourced in my week 2 highlights; other middling offerings included King of Kong and Monster Camp, both of which seemed to be preaching to their respective choirs.

Music docs didn't fare well either: igChar was thumbs-down on the whiny Kurt Cobain About a Son, and there's just no excuse for the horrible production values of The Life and Times of Yva Las Vegass.

But the most disappointing local film of the bunch is surely Cthulhu, a Lovecraft-inspired gay love story by way of supernatural disaster fantasy tale, which has one more screening (Sunday 4p Nep) and which you really oughtta skip. The images are frequently stunning (when they're lighted properly, anyway), and Tori Spelling is the best thing about the movie (which should tell you something), but everything else — and by that I mean acting, writing, and direction — is mostly bad. Not even bad in a funny way, either, though I did giggle a lot less at the "serious" stuff than the audience members around me at last night's nearly-sold-out world premiere at the Nep.

I wish I'd missed it.

So what's everyone looking forward to this final SIFF '07 weekend? (Hopefully not Cthulhu.)