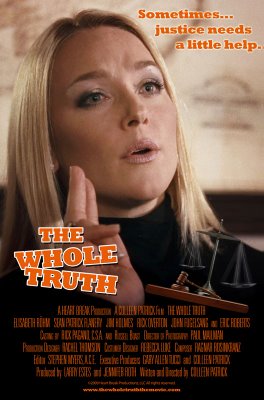 Angela Masters is an acting coach who pays her bills my coaching defendants on how to act in the courtroom. She is motivated by the money and gets lectured on how she’s helping guilty people go free. When coaching defendants, she rattles off a host of behavioral traits they need to change but really, she just makes them wear terrible wigs that wouldn’t get past the assistant costume supervisor on “Maude”.

The film is not just unfunny, it is offensive. It takes ideas that I hold sacred (everyone being entitled to a defense, innocence until proven guilty beyond a reasonable doubt) and mocks them from the perspective of someone who has not the first clue on how the legal system works; has screenwriter and director Colleen Patrick ever seen a single episode of “Law and Order”? Even worse, it rests on the idea that juries are made up of easily manipulated dupes who are oblivious to any evidence.

Writer/director Patrick was at the screening I went to but I didn’t stick around for the Q&A – so I don’t know what was said but I hope she apologized.